I was planning a grand sleep-in this morning, followed by The Great Planting Day. But I was like a little kid at Christmas, or myself at Christmas, so excited about having a whole Saturday to do whatever I wanted. I was up at 7:30am, which technically is a bit of a sleep-in when I’ve been getting up at 6am to get ready for work and drive there.

It was after 10am when I headed into the garden, after doing my exercises like a good girl and catching up on emails and so forth. I haven’t done my exercises all week due to my routine changes, which is a terrible thing, and I was feeling guilty. I have to learn to do them after work instead of in the morning. The Husband came out to the garden with me and asked me what I wanted him to do. I just about fell over. Internally.

The Great Planting Day turned into The Great Digging and Tomato Day. We started by digging and cutting out all the wisteria we could from the Carport Bed so I could fit more plants in there. I knew wisteria was a beast but I have never witnessed its underground habits before. The big fat roots were all heading under the carport paving stones, instead of chilling out in the actual garden bed. Whether they were in search of nutrients, water or shade or were just nuts I don’t know. We hacked out what we could. That will do for now. When it starts to come back I’ll have to paint woody weedkiller on it. I actually love wisteria flowers, but this is a prime spot for tomato and cucumber growing, with the wire fence behind it and lots of sun. I saved one rooted piece of wisteria and temporarily planted it in my herb planter until I get more potting mix for its own pot. The Husband even fixed up the wire netting that was coming apart behind the wisteria.

The next digging task was removing the hydrangea in the corner of the vege garden, which I decided would be the pumpkin corner. First I cut all the branches down, as it was a pretty hefty size. Then I chopped ’em up into nice compost-sized bits. Meanwhile, after a stint on the computer, The Husband came back to dig it out for me. It was hard going. After removing one sunken old paint bucket, The Husband discovered that the hydrangea was growing in and through another old paint bucket, which was nicely mangled from his digging and whacking with the wrecking bar. He got most of the hydrangea out but I’ll have to finish the job off tomorrow. There is kikuyu grass in there too. Naturally…

I finally got to the tomato planting part as The Husband started making the bamboo tomato tee-pees. I instructed him as to how they should be assembled, but I had to hurriedly finish planting and watering my tomatoes in the Carport Bed so I could give him a hand. Instead of using biodegradable string to tie the pieces of bamboo together, like I wanted to, The Husband brought out his cable ties and proceeded to do his thing. It was probably quicker but I think I’ll do it the more natural string way next time. He formed the frames of the six tee-pees then brought them into the vege garden and placed them in the Twiglet-approved locations. He was instructed to avoid standing anywhere on the vege garden so as not to compact the soil, but took this more as a guideline. One of my nasturtiums was very nearly squashed, likewise the tiny carrots, and one label stake was broken.

The Husband getting down to business with the bamboo tee-pees.

The Husband likes his cable ties even more than Nala does.

We then attached all the side pieces, sawing them to size. It was fortunate that I had hoarded so much bamboo, as we used it all, aside from a few bits used to weigh down my strawberry netting, the tiny bits that weren’t sturdy enough and the Mother Pole, which I haven’t thought of a purpose for yet. Since we we were attaching all the sides in the final locations, we were able to make most of the side pieces span across more than one tee-pee, which meant less tying and sawing and more sturdiness. It took rather a long time to assemble all six of these. And it was hot. I had to bust out my shorts for the first time. The Husband earned major brownie points with all this garden work. The neighbours probably think we’re nuts though. It probably didn’t help that the hose developed a sudden hole, which created a tall water feature. This was actually slightly helpful, as I could water the vege garden from two directions. But then The Husband used the water feature to wet me and my vege plan.

I got the rest of the tomatoes planted, but there was a bit of variety confusion. Serves me right for putting all the pots into one tray. One of the ‘Amish Paste’s looks like a ‘Small Fry’. I couldn’t tell the difference visually between ‘Amish Paste’, ‘Black Krim’ and ‘Big Beef’, but the ‘Small Fry’ cherry tomato has a markedly different leaf shape. This could mean one of two things: either I gave my manager an extra Amish Paste instead of a cherry tomato or I just stuffed the pots up earlier on. Pooh sticks. I have got to be more organised. I am flipping wildly between organised and disorganised at the moment. I will have to wait until the tomato plants get bigger to see what I’ve done. 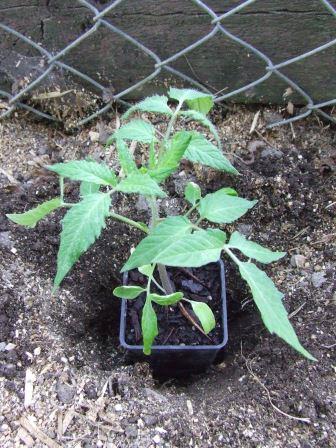 A tomato ‘Amish Paste’ waiting to be planted.

A tomato ‘Black Krim’, planted deeper than it was in the pot.

The ‘Manchester Table’ carrots that I sowed some weeks ago never showed; they were probably too old. I really have to get on top of that old seed issue… I used their failed space to sow the ‘Cosmos Purple’ carrot seeds that The Mother and The Father brought me back from Melbourne. I didn’t want any more carrot failures so I spread a thin strip of seed raising mix down, followed by the carrot seeds and topped with a thin sprinkling of seed-raising mix to cover the seeds. I had wanted to get the ‘taters planted today, and the pumpkins, which I have yet to buy, but I couldn’t fit it all into one day. The good part is, I have another two whole days yet. Oooh yeah!

Carrot ‘Bastille seedlings on the left and newly sowed ‘Cosmic Purple’ on the right. 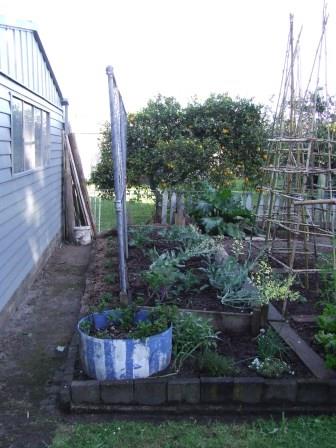 Tomato plants along the wire netting.