It’s been life in the trenches for me this weekend. Digging and more digging. It’s not the most relaxing way to spend a long weekend but it is productive. Yesterday afternoon I dug trenches for the ‘taters.

The ‘Agria’ seed potatoes sat in a tray in the garage for a number of weeks chitting. Or getting chit-faced. Being allowed to sprout stems is supposed to help the plants grow better and faster. I’m not used to planting ‘taters in the garden; I usually plant them in large vessels like an old rubbish bin, to save space. But now I have space. I dug out the trenches one at a time, armed with a tape measure and a shovel, putting the soil in a pile along the side of the trench. I had looked at a number of ‘potato spacing’ websites, which all gave different measurements, so I went with the most space-saving one: 30cm apart in rows 45cm apart. Again armed with the tape measure, I placed my potatoes in the trenches. I can’t help myself, I need the tape measure. If it’s any consolation, I didn’t measure the depth of the trenches. They were about 20cm deep.

When it came to filling soil in over the potatoes I used my hands, which was a good way of removing all the excess stones and random bits of plastic. And a piece of glass. And cat poop. When I discovered the cat poop I accidentally threw it into the neighbour’s yard. Honestly, I’m not a poop thrower. I was aiming for a bush, but flung too hard and it sailed over the fence. Oops! I put my head down and carried on, looking busy. I may have looked like I was chuckling to myself but I was just excited about the potatoes… I covered the potatoes with maybe 15cm of soil, leaving the remaining soil in tidy rows alongside the trenches. Then I watered my ‘taters. And I didn’t even say “precious” once.

The next digging task was the Pumpkin Corner. The Husband had got out most of the hydrangea and the random buckets, but there were still some large roots, a scrappy plant growing through the paver edging and the kikuyu grass to dig out. I did some of this yesterday afternoon and continued with it today. It was hard work, but I was driven by the desire for beautiful pumpkins. I haven’t grown pumpkins before because The Husband doesn’t like them. However, he will eat certain pumpkin foods, like pumpkin scones, pumpkin bread and the odd piece of roast pumpkin. I love roast pumpkin, so I decided it was time I just grew some.

At some point it started raining, so I did what any sensible gardener would do and kept going. Aside from the usual stones and bits of plastic, my digging uncovered a strange grey layer, which I looked at and smelt suspiciously, until I figured it was probably old wood ash, judging by it’s bucket-size diameter and the presence of nails all through it. I dug all I could of that out since old nail-y wood ash is probably not helpful. It was just light rain, but by the time I had finished cleaning up the Pumpkin Corner I was cold and wet as well as dirty, so I left mixing in some compost and removing the rubbish pile for another day. I was almost glad the rain set in for the rest of the afternoon, as I was pretty darn tired. It is also giving the veges a good start to life. On days like this, I’m so glad we have a spa bath… 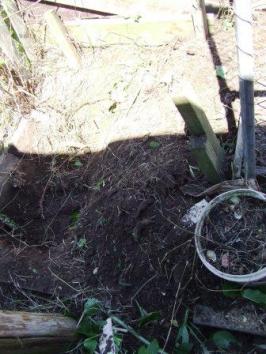 Looks like a tornado’s hit. Nope, just The Husband.

The Pumpkin Corner – screened of its kikuyu and other large roots. And other random things.