I have to admit that the vege garden has been left to its own devices a bit lately. I haven’t been the best plant mum but I’ve been a good human mum and that’s what really matters. The Little Fulla decided he’s not sleeping through anymore and then then he started a needy process called teething. Eek.

One thing I’ve noticed about the deep bed method (if only that referred to sleeping) is that the vege bed needs a lot less watering. Thank goodness for that or I would be growing a lot of brown crops right now. Water is absorbed into the loose soil more easily and travels down to where it is useful instead of running off or creeping just below the surface. I’ve been watering the vege garden about once a week, or twice if it’s lucky, and that’s pretty good going in this sticky weather! There was one day when it rained. That was nice. I’m waiting for my special friend autumn to arrive.

Our pantry door now features a produce board so we can keep track of what veges and fruits are currently available for use. I would like to get some coloured magnets so the crops can fit into three categories, maybe:

I could even get crop name magnets so I don’t have to re-write and rub things out. Yes! And everything can remain nice and alphabet-orderly and all will be right with the world. The board will probably of more benefit to The Husband since I usually know how things are progressing in the garden anyway.

So, what is available at the moment? In the HEAPS category there are tomatoes, cucumbers, chillies, kale, spring onions and potatoes (which are in the pantry).

Once the tomatoes started ripening, and the thieving chickens were thwarted, they were off like a shot. The Husband has chicken-wired the paddock fence behind the vege garden so the sneaky neighbours’ chickens can’t get in. Unless they walk around from the side and past the Herb Garden, which they haven’t dared to do yet. It’s a definite improvement anyway! Free from their attackers, and despite the plants being a bit worse for wear, the tomatoes have been coming inside in droves. Last weekend The Husband used 4kg of tomatoes to make tomato soup. Yum! I was busy with The Little Fulla and making baby food and forgot to take any photos of it.

The cucumbers just keep coming too but in less quantities, as we have two plants. We’ve given a bunch away and I’ve found a few cucumber sorbet recipes I’d like to try. Soon. There are eight and a half cucumbers in the fridge right now…

We have a whole heap of green chillies in the vege garden, which are starting to turn red. Two of the ‘capsicum’ plants turned out to be chillies, leaving me with four chili plants instead of two and less capsicums than is convenient. Oops! Was it because I had baby brain or because chillies are part of the capsicum ‘Summer Salad Mix’? I don’t know. Of the five capsicums, two are purple, two are green at the moment, and I’m not sure what they’ll change to, and one is the long red capsicum that starts out life a pale snot green kind of colour. Is that a good mental image? Well, it’ll have to do because I forgot to take a photo and it’s dark now. Until next time…

The spring onions are humongous but now have rust. Moving along… I have swathes of kale and swathes of caterpillars eating it. And, I just discovered, green stink bugs too. I have failed to deal with the caterpillars this season, other than throwing a few big ones to the chickens when I’m out there, which is amusing, but that’s ok, there is still plenty of kale. It just has to be washed very thoroughly. More thoroughly than I washed it last time we had it in a salad. I had a green caterpillar on my plate and then I found another crawler making a run for it across the couch where The Husband had been sitting.

In the ‘Some available’ category there are carrots, capsicums, celery, pumpkin, sorrel, and, just barely, lettuces and rocket. The lettuces have been going to seed quickly in the hot weather but I think I can make one more harvest. I have just bought and planted some more lettuce seedlings, as continuously sowing seeds and keeping them moist is nigh on impossible at the moment. The rocket has rocketed to seed and I haven’t sowed any more, but some if it is still useable. It can self-sow. Yes, that was my plan all along… And the flowers are so pretty! The sorrel is growing in a pot at the moment but it’s hankering for a bigger space. I’m enjoying eating it. It takes me right back to my childhood, when we used to munch on it for a snack from the garden by the back doorstep. 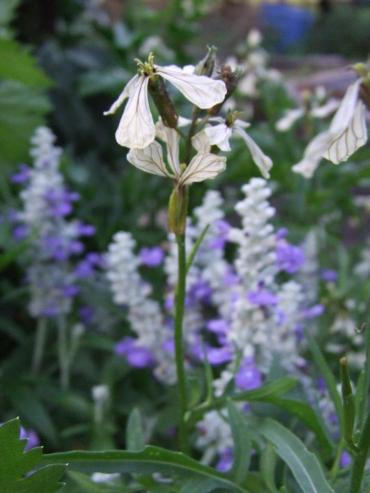 The carrots appear to be doing quite nicely but we have yet to harvest any since we’re still eating through the accidental supermarket carrot glut. We already had a bag of carrots to get through when The Husband came home with another one. “Why did you get more carrots?” I asked. “You put it on the list,” he replied. “Ah, that was currants…” 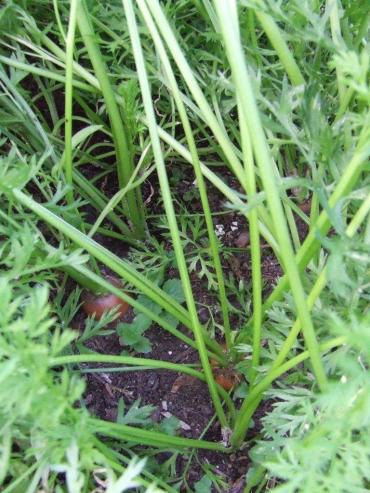 The carrots are waiting.

I am quite pleased with my celery. The seeds I selected are a picking celery. In habit it looks like something between celery and parsley and you can pick individual stems as you need them instead of having to harvest the whole thing. This is much more useful, as we don’t often use heaps of celery at once. And they don’t have to be mounded.

As for the pumpkins, I still have two from last season to use before thinking about the current season’s ones. There are some good-sized pumpkins growing in the garden and I’m waiting around to see how big they will get.

In the ‘Nope’ category at the moment are the beans and leeks. The beans were slow to get going but now look magnificent, albeit without any bean pods. Somehow I only ended up with four leeks to plant out and then forgot they were out there. I think they’re still alive amongst the forest of other things but they got a bit dry for a while there. Oops!

What isn’t on the list yet is bok choy and other brassicas (and garlic, which we always have whether it’s from the garden or bought). I’ve just planted some bok choy seedlings and a mixed tray of brassicas, which I assume from the label consists of two cabbages, two cauliflowers and two broccoli. I don’t want to plant too many yet due to the weather but I had to hurry up and fill the empty potato bed with something. There is still more space in there to be filled. I hastily assembled some makeshift covers for the brassicas out of the old window fly screens to try to stop white butterflies from getting to them, at least for a little while.

The vege garden has evolved from being highly planned to being “Um, I should probably have thought about what to do next.” It’s just too hot and busy. C’mon special friend autumn, why don’t you surprise us by arriving early? Then we can all be happy together. We can frolic in the garden in the cool breeze then have a nice cup of tea while watching the beautiful grey clouds and wearing our slippers.

Salvias in the setting sun.

A colourful little spider making his web on the salvias.