Obviously, I am new to chicken breeding, because I had no idea to what extent the little bits of red in Elrond’s black hackle feathers would affect his offspring. Although Elrond, the Australorp rooster, has a new home now anyway, I was happy to use him for breeding. (Update on Elrond: he is doing well in his new home so far. Although he entered the new flock at the bottom of the pecking order, which ought to do him some good, it hasn’t stopped him from ‘getting around’ with every hen possible right from day one. That is one virile rooster.) It wasn’t like Elrond had any big red feathers, just streaks of red. Initially I thought the buff/red feathers were only coming through in one chick, The Smoky Chick (a blue). Then I spotted some red coming through on Orange Feet’s black back. Then I spotted some red coming through on Little Spot’s neck. Crikey! The blue Little Spot was going to be my back-up roo after Mr Bingley. The red colour has more dominance than I realised. I think some research is in order.

The feather babies are approaching 10 weeks old now and are obviously still establishing their colours. Fortunately, no red has come through on any of the three girls yet. On close inspection, Mr Bingley has one feather on his back with a very faint bit of brownness on one edge, which is only visible on close inspection. This is disappointing but I hope it won’t get any worse. Mr Bingley is my number one choice for rooster, being a beautiful blue with dark legs, a dark beak and dark eyes. And he is getting more friendly with me by the day. He is the only one of the youngies who will purposely come over and eat from my hand as soon as food is offered, provided the biggies, Legolas and Frodo, are distracted. In fact, he would rather eat from my hand than the food vessels or the ground. Awww. 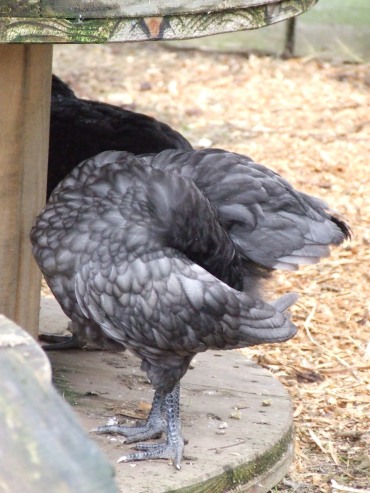 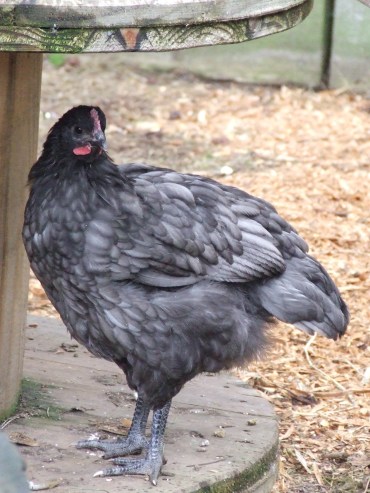 I decided to choose a back-up roo to grow on for a while in case Mr Bingley turns into a psychopath or befalls some other unfortunate fate. Little Spot was going to be my number two, as he is also a good blue with dark points. But alas! Those red feathers. So Little Spot, Orange Feet and The Smoky Chick are no’s. Guess who that leaves? Half Pie. Haha! I had to laugh when I realised that Half Pie, the dining room chicken, injured, alone, reintegrated, more friendly than the others (except Mr Bingley) but overlooked because of his paler beak and feet, was suddenly my back-up roo. How the tides have turned. Not that this is necessarily going to save his bacon at all, but it is funny that he has a shot now. It is more important to have a bird with good main body features than good feet and beak colour. And I have to minimise those jolly red feathers as much as I can since they seem to get more dominant with the next generation. I may end up having to start again with a new roo (home-raised though), but let’s hope it doesn’t come to that, for Mr Bingley is very agreeable. If only he had five thousand a year…

And now, I shall crawl off to the learning corner to teach myself a lesson or two about chicken colour genetics. I know, I had to start somewhere, but I’m still pouting because I’m feeling sorry for myself and a little inadequate.

6 thoughts on “The Red Feather Problem”