The feather child numbers have gone down with the removal of the three excess boys, Little Spot, The Smoky Chick and Orange Feet, leaving us with The Chosen Ones: Frodo, Legolas, Mr Bingley, Jane, Lizzie and Lydia. I moved the three boys into a temporary pen one night, which I was supposed to do ages ago, but there has been so much reconfiguring and work going on outside that I didn’t know where to put them for a while.

The little roos were getting in the way of handling time with the youngies I was keeping and starting to be more assertive in their pecking order. I didn’t want Little Spot to get any more comfortable in his leadership. One evening I pulled a black chicken out of the coop, thinking it was one of the girls, only to find that it was Orange Feet, the black boy. Oh well, I thought, I can hold him for a bit anyway. He bit me. Again and again. Even after I held him low to the ground, ‘squashing’ him for a little while. Didn’t I tell you he was going to turn into a little sod? And this was only a few days after I’d pulled him out to check on him since he seemed a bit off, and he wasn’t like that then. Obviously, he had recovered with a  vengeance from whatever was bothering him. Mind you, the next two days before he moved he ate out of my hand in the morning. But I sussed out your true nature Mr Orange Feet! The boys weren’t in the fattening pen very long before they took a trip to the other side of the rainbow. We just have so much work to do around here plus The Little Fulla’s first birthday next weekend. 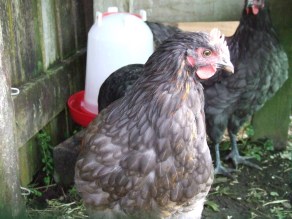 Note: I am about to briefly refer to the processing of chickens, though nothing too specific. If you don’t want to know anything about the other side of the rainbow, now would be a good time to sit in the corner with your hands over your ears repeating “La la la la la” until the next paragraph.

It was sad to say goodbye to Frodo’s boys but The Husband and I got it done quickly so I didn’t have to think about it too much. We had some road cones in the garage so I cut a bit off the narrow ends and we nailed them upside-down to the fence (which is coming down soon anyway) to make killing cones. The whole processing thing was new to us and took longer than I thought it would, but I was determined and purposeful. These boys were going to have a useful end to their lives. Part way through, it turned out that one of us wasn’t so keen on the whole thing. It wasn’t me. I think it was mostly the time factor, or the relationship between the time taken and the worth of what we were getting. The videos I watched don’t tell you how long it takes to pluck a chicken. In the end we decided to only finish one, as I didn’t have time to do the others by myself plus be around for The Little Fulla, who was (and still is) having a troubled weekend of teething. What is ‘sleep’? It’s a shame but it’s more important that we look out for each other and compromise when we need to. Needless to say, there probably won’t be any more chicken processing going on around here for a while, unless I have the time and will power to do it by myself. On the bright side, The Smoky Chick did taste good. I was very surprised when The Husband decided we would have wraps for dinner with chicken and salad fillings. The whole process has given me more respect for what is involved in getting to the stage of the packets of chicken we normally buy from the supermarket. We have definitely taken chicken too much for granted.

Moving along to brighter things… I am happy that I can focus on my chosen chickens now. The four 12-week-old youngies and two oldies have been adjusting to life with just each other. Little Spot was the alpha of the youngies so it must be quite a change for them. Mr Bingley is the highest ranking of the remaining youngies, according to my observations, and he has been coming out of the coop first in the mornings. He’s been pretty quiet to date and this morning, the first morning without the other boys within earshot, was the most I’ve heard him crow. He only had the one crowing session though. I wonder what his crowing habits will turn out like. Elrond, his father, was a real belter. The crow collar reduced his noise but he still crowed quite frequently during the day, especially towards the end of his time here. He is the only yardstick I have, but it would be nice if Mr Bingley didn’t crow quite so often. He and Lizzie are still eating out of my hand in the morning, which is great. I still need to work on Lydia and Jane. 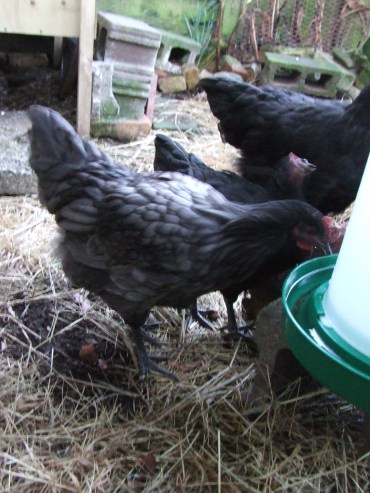 Legolas hangs out with the youngies (Jane, Lizzie, Lydia and Mr Bingley) while Frodo lays an early morning egg.

Frodo stuffs her face before laying while Jane waits her turn.

Frodo has been the noise maker of the oldies, letting the others know what’s going on, and she has gotten particularly loud at egg-laying time, for her and Legolas. Yes, Frodo, I can SEE your egg. Yes, Frodo, I know Legolas is now laying an egg. Legolas sometimes makes a funny noise that sounds rather like a duck quacking before she goes into the coop to lay, but after that she is very quiet and peaceful about it. Frodo and Legolas are rather equally paired. Legolas is still the boss but the only signs of this are her coming out of the coop before Frodo and going into the coop last at night and getting in at the feeder first in the morning. Frodo will sometimes peck Legolas at the treats bowl and both will often eat at the same time, including from my hand now. They are a good pair of buddies. It will be interesting to see how the three young girls fit into the pecking order when they get older.

It is weird saying goodbye to some of the chickens, but it has been an interesting journey and it is rather nice getting back to the ones I really want. Now we just have to get the vege garden and attached orchard pen finished for them. Soon, soon…

2 thoughts on “The Chosen Ones”