I finally got around to sowing some vege seeds. I had good intentions of growing all sorts of things from seed this season, including onions, the seed-sowing time for which has been and gone. However, I will never be without my tomatoes grown from seed. No matter how busy I am, even with a baby on the way (last year) or chaos galore, I will get my tomatoes sown. I don’t know why I’m this way with tomatoes. I suppose I’m so used to growing them from saved seed each year that I have acquired an in-built clock that tells me I must sow tomatoes and I must do it NOW. Well, preferably at the end of August, but the start of September is fine. At the same time I now sow capsicums and chillies. I need to work on getting an in-built clock for all the other vege sowing.

I spread out my tomato seed packets on the potting bench. I had seven varieties. Ahem, cultivars. The problem was, I hadn’t even started my vege crop spreadsheet to figure out where everything was going to go and how much I could fit in, which is kind of important with all the new beds and my tendency to buy/sow/grow too many things, so I had no idea how many tomatoes I needed. Or wanted. The ‘Small Fry’ cherry tomato I promptly threw out. I grew it once and it was crappy. I don’t know why I still had the packet. I gave ‘Big Beef’ a miss too, as both the ones I planted last year got a virus and I didn’t really need them when I had other nicer cultivars. That left me with five cultivars that I wanted to sow: Amish Paste, Black Krim, Black Cherry, Gardener’s Delight and Gold Nugget. I was determined to be careful with my sowing and not go overboard, considering the amount of varieties I had before me, but at the same time sowing enough to allow for failures. Here is what I sowed:

That’s a total of 26, which is quite restrained really. Not all of them will germinate or make it to maturity. I’m planning to keep them out of reach of The Little Fulla. I haven’t allowed for child tornadoes. We always like to have Amish Paste for bottling purposes and Black Krim for eating purposes. Gardener’s Delight impressed us last year with it’s great-flavoured fruit, later maturity and longevity, so it is the newest must-have on my list. We had two plants last year and that was plenty. The Gold Nugget succumbed to its neighbour Big Beef’s virus last year but the few fruit I did get to eat were tasty and it is nice to have some colour difference, so I’m giving it a whirl again. The Black Cherry is new for me.

Next I sowed the capsicums. I still had two packets: California Wonder, which is a red, and Colour Salad Selection, which is a mixture, some of which turned out pretty random last year. Or else I mixed things up in my pregnant state. I’m still not sure. I never got any California Wonder last year as I had to take the seed trays out of the hot water cupboard in a hurry when I went into labour in the middle of the night, and that tray hadn’t germinated yet and obviously didn’t appreciate being alone for a few days in a darkened house. We could really do with some red capsicums this year. I’m hoping for some purple and yellow in the Colour Salad Selection but it is pot luck. Here’s what I sowed: 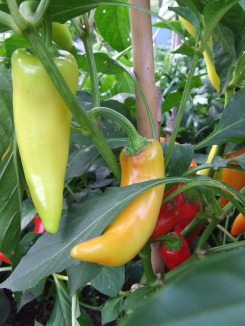 ‘Colour Salad Selection’ can throw up any of these capsicums, except the long red chillies at the bottom. Maybe.

After the weirdness with the chillies and not-quite-chillies last year I am starting with a new, proper seed packet. I wanted Cayenne chillies to dry and grind for cayenne pepper, which The Husband is very fond of, but they were out of stock, so I decided upon Tabasco chillies instead, which are a similar heat rating. We don’t really need many chili plants but since I had a seed tray just for chillies I sowed 6 of ’em.

Against my better judgement I sowed half trays to save on space and seed raising mix and will prick the seedlings out to transplant into individual pots to grow on. This means that there is more than one cultivar in a tray, except for the chillies and the Amish Paste. The chillies will not be fraternising. Not that anything else will be fraternising. I hope. In hindsight, considering last years’ track record, I probably should have given things their own trays. But where would the fun in that be? The seed trays are hanging out in the hot water cupboard for germination purposes. To make things more interesting, I chucked two Cavolo Nero seeds on the end of the chili tray in the name of not wasting space. Yes, I didn’t really think that through because I was in a hurry. The Cavolo Nero seeds have germinated already and might be screwed because I can’t take the tray out of the hot water cupboard until the chillies have germinated. Oops!

Now, I must remember to plan for planting the different capsicums and chillies well away from each other so they don’t cross-pollinate, so I can save seed that is pure and not some weird mutant chili-type thing. I’m not sure how I’m going to do this yet. I’ve started my crop planning spreadsheet, but I’m still working on it. There are a lot of potatoes to fit in. And I just remembered about those Atlantic Giant pumpkin seeds I bought in a fit of excitement…