Mr Bingley has finally returned. I want to say returned to Netherfield, and I even pondered changing the name of the pen to Netherfield Park, but let’s just leave it as The Cedar Pen for now. Mr Bingley was in chicken hospital in the garage recovering from sour crop. He didn’t have it as bad as Jane did but, being a rooster, he was a little more difficult to treat. He is a good boy but he started pecking me at one stage so I’m not sure how he’ll be towards me from now on. Hopefully it was just because he was sick and didn’t like being cooped up in a cage.

While Mr Bingley was away, the hens got rather frisky and some challenged each other. I saw Frodo having a stare-off with Lizzie, which Lizzie won, Frodo took on a noisemaker role again and Georgiana was having more licence than usual to chase the chicks. There was one interesting episode that occurred while Lizzie, the boss hen, was laying. The two chicks were having a sparring session. Kitty came over and joined in. Georgiana came over and started chasing them. Lydia, 2IC, came over, swiftly pecked Georgiana on the neck, and that was the end of all that. I was surprised, as this was the first time I’d seen Lydia do something responsible with her leadership. It is a far cry from her days as a fight starter. She is the smallest hen but she packs a punch. At the moment, the hen’s pecking order goes: Lizzie, Lydia, Frodo, Jane, Kitty, Mary and Georgiana. Mary used to be at the bottom but her status has been on the move since she came of age and caught Mr Bingley’s attention. When Mr Bingley left, Georgiana was keeping her distance from him and the other hens like a shy teenager.

Mr Bingley’s return to the flock was fascinating to watch. The first thing he did was dance for and mate with Frodo. Interesting. Then he had to re-establish his dominance and let the girls know that he wasn’t going to take any nonsense. The hens all flocked around him like a pack of schoolgirls, checking him out and vying for his attention. The big surprise was Georgiana. She couldn’t get enough of Mr Bingley. She got as close to him as she could and lapped up any attention and morsels that he gave her. However, Mr Bingley has not maintained an interest in her and she is back to hanging out with the two youngies or off to the side. Mr Bingley has been very busy looking after all those needy females.

Another interesting thing to note is that 8-week-old Mr Collins has kept crowing his little crow and Mr Bingley’s response is to do nothing. Maybe that puny little chicken is not a threat to him or maybe Mr Bingley is too busy with his girls, but whatever the case, peace is good.

Another chicken event that happened was that one of the hens pulled up ill and lame one afternoon. It was Frodo. She had been standing in the same spot for ages, looking very sad and droopy. When I went to check on her she was limping badly on one leg. It didn’t take much to catch her at all. My heart sank. Frodo is my most precious hen, being my only purebred female (little PB’s gender still being unknown), my faithful broody mumma and the only hen I’ve had from the beginning. I couldn’t see or feel any leg injuries. This was almost deja vu with last time Frodo was unwell with what I think was a toxic reaction, except this time her comb was still red. That actually made me more nervous, as I suddenly realised it could be Marek’s, with leg paralysis, like what happened to dear Legolas. It was still a little early for the heightened ‘Marek’s period’, which usually kicks in when the chicks are 9-10 weeks old (they were 8 weeks old), but I was scared. I syringed vitamin water into her then put her in the hospital cage. She ate a lot, drank a lot and ate a lot of grit, so that was good. In the morning, what do you know, Frodo had bounced back to her normal self. Phew! There was no sign of limping. And so, a toxic reaction is what I’m suspecting again. I caught it early, as Frodo had been full of beans earlier that day.

Yet another thing going on with the chickens is an egg issue. Both Jane and Lydia have been caught red-handed eating eggs. This is very bad! I’ve had a few issues in the past with egg eating, which I never got around to writing about. In the early days of laying for Lizzie, Jane and Lydia, I found a few egg messes in the coop and eggs missing after I’d seen a hen in the nestbox. Naturally, I suspected Lydia, because, well, Lydia. But one day I caught Jane sharing her egg meal with Mr Bingley in the coop. I used a combination of blown eggs filled with dish liquid and hard fake eggs to sort that out. Plus collecting eggs often.

Back to recent times, I thought Lydia’s reduction in laying was due to the decrease in daylight hours as we head towards winter. Apparently not. There have been a couple of times when I’ve seen her in the coop but then there’s been no egg. I thought she was just bossing around Mary or Kitty. Apparently not. Yesterday, Jane ran out into the pen with egg shell dangling from her beak, making a big noise about what she’d found. Lydia quickly grabbed a piece off her and the others were gathering fast. I ran in, grabbed the egg remnants off Jane, then went for Lydia, but Lydia had already eaten her forbidden morsel. Now I know both of them are at it. Today, Lydia ran out into the pen with some eggshell and ate it before I could grab it off her.

This is going to be tough to deal with. The hens don’t sing or yell the egg song until after they come out of the coop, and by then, the egg could be gone. I kept checking Jane again and again as she sat in the nestbox today. After a while, it became evident that Jane was actually exhibiting broody behaviour. Although she didn’t squawk, she raised her hackles fiercely and pecked at me fiercely when I tried to move her. Sheesh, one day egg eating, the next trying to be broody. She did actually lay in the end and didn’t eat the egg. Phew. I am watching her very closely. Jane will never be allowed to hatch eggs so if she becomes fully broody she will be straight into the broody breaker. Even if she wasn’t an egg-eater, Jane is my most neurotic hen (Mary has settled down somewhat) and she has tested my sanity too many times. If I ever get unemotional enough to sell or cull hens that aren’t useful enough for laying or breeding, Jane will be the first to go. That sounds harsh, but, now that I have a good number of chickens and not a whole heap of space, I do have to start thinking about drawing lines, especially when egg-eating is involved. Lydia is lucky I like her so much and she is a very good layer. This is going to be a tricky issue to deal with and I must nip it in the bud or I will end up with more egg-eaters and no eggs. 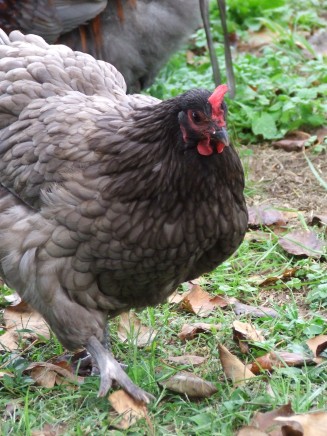 Jane is in my naughty books. 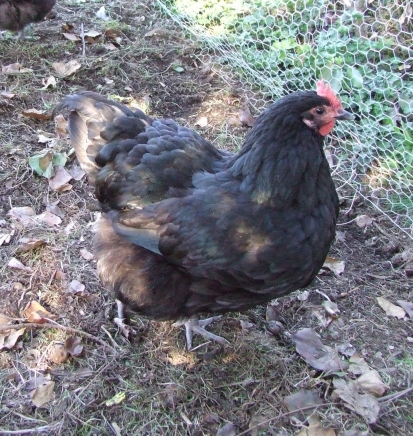 I felt a strange sense of comparison to wily Lydia and her nutso son, Mr Collins.

While we’re talking about the feather children, we better have another look at the youngies. They are 8 1/2 weeks old now. I have almost given up handling Mr Collins because it’s probably doing more harm than good. He freaks out all the other chickens with his terrible screeching when I get him out of the coop at night and he struggles so badly that it’s hard to pat him or do anything with him, even at night! His sole purpose in life is keeping PB company until he is big enough to go to the other side of the rainbow. If more chicks had hatched I was contemplating culling any Lydia boys as soon as I knew they were boys. Now I really know that Lydia + boy = beast of terror. Well, at least his existence has been good for PB.

PB is still being mysterious and I am still changing my mind a lot about whether PB is a girl or a boy. However, my gut keeps going back to girl. PB gets a little more agitated than when he/she was younger but doesn’t seem to be raging with hormones and will still eat from my hand and sit in my arms nicely. Looking at all PB’s feathering, I think girl, but his/her feet are big. And PB is big overall. As for PB’s comb, it was big initially, but it hasn’t changed much recently. I have also noted that photos on the breeder’s website show Australorp hens with large combs and wattles, bigger than any of my girls. This doesn’t really help give me any clarity though! I just hope PB isn’t going to be one of those weird mixed-gender chickens that pop up sometimes, like a ren or a hooster… 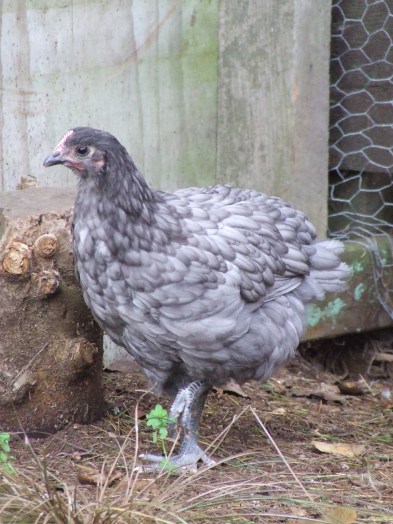 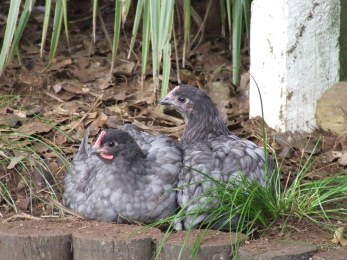 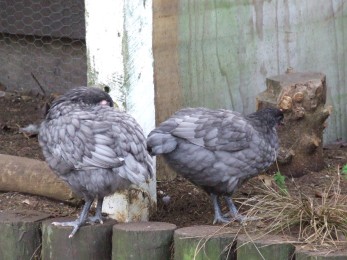