The shortest day of the year is almost upon us and although most of the winter is still to come, I’m feeling fantastic! There is so much happening around here and I’m enjoying seeing the progress in our yard and thinking about the opportunities to come.

I got my garlic planted. I didn’t get to plant it as early as I was intending to, but I still got it in before the shortest day and well before I usually do. I am really hoping to survive the rust this season. Starting from scratch with store-bought seed garlic is not fun when you’ve worked to grow bigger cloves of your own! I didn’t buy as much seed garlic this time, just in case. I planted 20 or 21 cloves of Printanor garlic in the vege garden and 2 cloves in The Herb Garden, as a small measure to avoid the rust. It’s better to get something than nothing. Then I planted my giant cloves of elephant garlic: 4 in the vege garden and 1 in The Herb Garden. This is the first time I’ve grown elephant garlic so I’m excited to see how it grows. And tastes. We all know I’m a fan of giant veges… 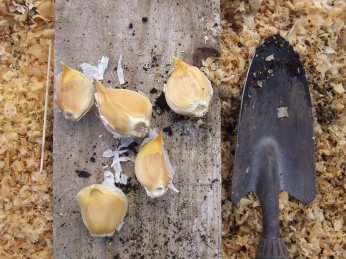 The huge cloves of elephant garlic. 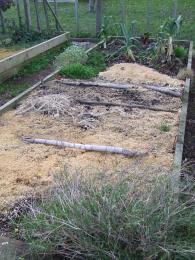 One day in the future there will be garlic leaves poking up out of my chicken wood shavings mulch.

I watered the garlic in with some compost tea. I forgot to tell y’all about my compost tea. When the comfrey was growing like bonkers last season I chucked a lot of it into a barrel and filled it with water. Some time later I added some chicken poop in there for some extra goodness. The barrel has a lid that is weighed down by a brick. And boy, does it need a lid! It doesn’t smell quite as bad now, after brewing for many months. I didn’t use it as much as I should have last season as I kept forgetting about it. That’s what happens sometimes when you put things in a far away corner. I dilute it to about 1 part nutritious, stinky tea to 10 parts water in a watering can and water stuff with it. I am going to make a point of using it a lot more and would like to experiment with some different kinds of compost tea if I have the time.

I made comfrey tea. Then I added chicken poop. Now, I’m just calling it compost tea.

My compost tea barrel. I don’t have a photo of the how the compost tea looks now, but it is brown, stinky and full of goodness for the plants.

Who remembers my mushroom-growing adventure? Well, after doing all the required bits and pieces to get my oyster mushroom kit going, which wasn’t quite as ‘easy as growing grass’, I was left with the waiting period. While I got busy with my assignment I forgot to check on the mushrooms and then BOOM! The mushrooms appeared! This is what I found when I finally remembered to check them:

First, you wet this…

Then you tie it up in this then drain it…

Then you put in this and do that…

I grew mushrooms! Now we just have to wait until they get big enough to eat. Nom nom nom.

On Saturday, The Husband worked on his lumberjack skills. The doomed, unproductive, yellow-fleshed plum tree met it’s fate. I convinced The Husband to cut off more of the top branches before felling the rest of the tree, while The Little Fulla and I carted them off the the pruning mountain. Then, The Husband set to work on the tree with his chainsaw. There is always something to be nervous about when it comes to felling a tree and this time it was the fact that the part of the tree coming down wasn’t a straight trunk, it was leaning towards the paddock fence with the neighbour’s place and had a previously cut bit lower down on the trunk. But, The Husband is honing his tree-felling skills, and is rightly quite pleased about it. He secured the tree to the corner post on the deck with a rope and ratchet, cut a good wedge, made a straight cut from behind, then hauled on the rope, pulling the tree over in the right direction, avoiding the fence, the potting shed, the blackcurrants in the planter, any beings and even all my young plants in the garden bed. He then cut most of the tree up into firewood. We sure are supplying ourselves well with our tree felling at the moment! Don’t worry, we’re not going to fell ALL the trees.

The doomed plum tree on the right finally disappeared.

There’s a lot of empty space now, but not for long…

I decided I’m going to keep our second Billington plum tree that is in the planter. I was going to sell it because I thought one tree was prolific enough, but we really like the Indian plum chutney I made and I’m a total fan of the frozen sliced fruit in the less fruity seasons of the year, and the plums just taste so good, even if they all come in a short space of time. So, the potted Billington is going to join its old Billington plum tree buddy in replacement of the felled tree. “But didn’t you buy an almond tree to plant there?” I hear you say… Yes. But, that is going to be planted in the new chicken pen, The Cedar Pen.

When I set up The Cedar Pen for the chickens I cleared out a lot of shrubbery because it was weedy, overgrown or needed to be trimmed out of repelling-the-chickens-over-the-fence height. I have been thinking about what I could plant in there, as it is not going to remain so bare. First, the ‘All In One’ almond got allocated a spot in there. Then, I thought, hey, there’s actually space for another fruit tree in here without cutting out too much sun. So, I consulted my Fruit Plan to see where there were harvest time gaps that I could help to fill. I spent some time graphing my fruit plan to get a better visual of which months had low harvesting possibilities, but my two graphs somehow disappeared while The husband was working on computer backup things.

I have decided on a ‘Royal Rosa’ apricot tree. Harvest time is November to December (late spring and early summer) and it is supposed to be good in warmer areas. We already have one very young apricot tree, the dwarf ‘Aprigold’ in The Herb Garden, but we could do with more apricots, especially in November when citrus is the only big fruit available in our garden.

Yesterday, The Husband and I worked on curtains for the woodshed. That makes a quirky mental image! No, we weren’t making it look pretty, we were making it more functional. The woodshed had gotten covered in a hotch-potch of more and more chicken wire and plastic netting in attempts to keep the chickens out of there and it was getting rather awkward to get firewood out. I cut a curtain, or screen, for each bay of the woodshed, nailed them on at the top with fence staples then put three nails down the wooden posts on each side for hooking the screens onto. The Husband fitted plastic grommets over the holes to hook over the nails. We just need a few things to finish this project: a couple more grommets, something to weight the screen down at the bottom and some sort of string system that The Husband wants to do so the screens can easily be hoisted up for accessing the woodshed. It sure looks a lot more tidy now. 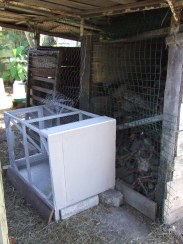 The woodshed at its peak of hotch-potch coverings.

The Husband had just started leaving netting all over the place so I had to start this project on the weekend.

The woodshed with new screens. I chose a light colour to brighten up this space. 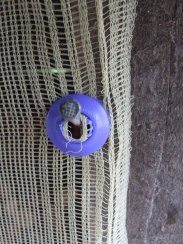 A plastic grommet that can be clamped onto the shade cloth with pliers.

Speaking of tidiness, I did some tidying up around the back door, which had been gathering more and more stuff. The back door often acts as the front door so the area does need some work to make it better. The wooden box that was sitting just outside the door was holding paper and cardboard for the fire, but didn’t have much left in it and I had sized it up for another purpose. I emptied it out and moved it into the garage to store The Little Fulla’s outdoor toys in, which is a great improvement on the cardboard boxes that they were sitting in. Removing the box means there is more space for walking around the outdoor table and chairs and that the shoes can be lined up nicely instead of being a major trip hazard. I also chucked out one of The Husband’s pairs of old work boots, since they were falling apart and there are two pairs outside. Unfortunately, he found them in the bin and retrieved them. What does a man want two pairs of old work boots for? This is not the last word on that matter. I would like to build a small, narrow shelf to store shoes and things on up against the wall. One day… 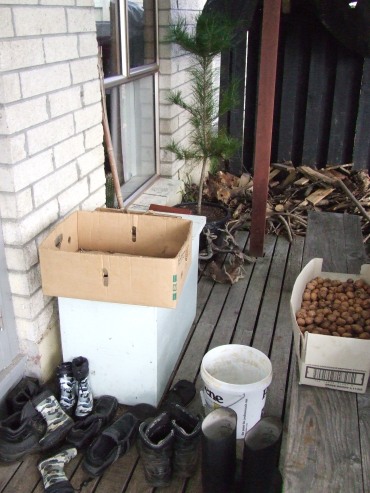 Things were getting messy and hazardy outside the back door. 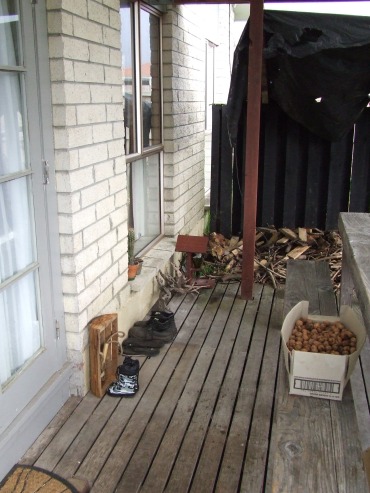 Tidiness does the heart good.

One thought on “It’s Winter, But The Garden is Alive”