One of the newest members of my flock has kept me guessing. Again. After the rollercoaster PB/Jane B game of Hen or Roo? I found myself in the unsettling Lorelei game of Hen or Roo? Lorelei is my young silver laced Wyandotte and the friendliest of my chickens. For a while there I was worried that she might be a little cockerel. She was very slow to feather up at the back end, which is often a male thing. However, her comb and wattles remained small and pale and the lack of pointy saddle or hackle feathers gave me hope that she would be a girl after all. She is now somewhere around 16 weeks old and is looking decidedly hen-like. Hooray! Lorelai and Sookie are my snuggle chickens, when I can grab them, and they are very good buddies so I would have hated to separate them. Jane B still doesn’t trust me out in the pen since her buddy Mr Collins disappeared, but I think she was pretty stoked with me when I threw lots of slaters to her today. 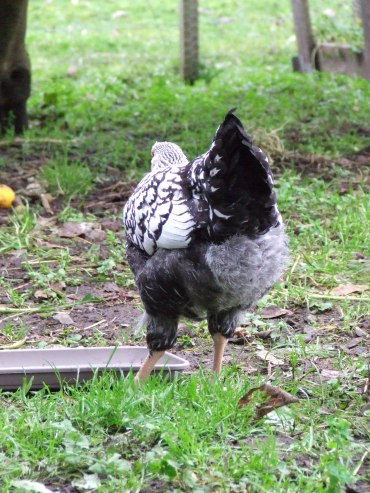 Lorelai’s butt. She looks like she has fluffy trousers on. 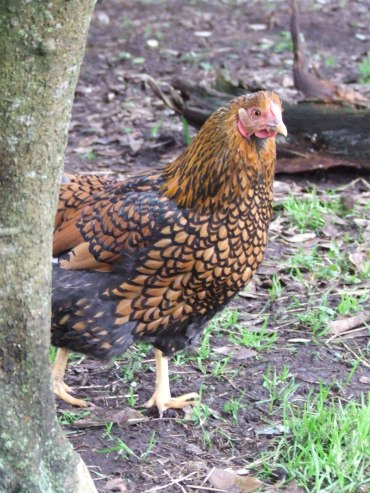 Sookie, Lorelai’s buddy. The Wyandottes are pretty chilled out.

We went away for four days for a family holiday, returning last night. I am always nervous about leaving the chickens. Just before we went away I made a new gate for the chicken pen. Before this we had a solid plywood pallet attached by a rope, that was heavy and awkward to maneuver open and shut. I think that’s how I got a bung shoulder. Also, Mr Bingley escaped over the gate more than once after discovering that he could do so while trying to rescue Kitty from Chicken Hospital. The gate I had there before the temporary pallet, I had moved alongside the carport as a second gate for The Cedar Pen.

I could not have Mr Bingley escaping while we were away so I made this wire gate with wooden sides. Chickens are far less likely to escape over a wire barrier as there’s nothing to fly up to and rest their feet on. It would be stronger if it had wood along the bottom but we will see how it goes. I changed the hinging side to the garage corner by hammering a piece of wood into the ground so that the gate can be used in two positions: where it is in the picture below when the chickens are in The Orchard Pen and closer to the pear tree between the garage and the corner of the woodshed when the chickens are in The Cedar Pen, so that they can’t access The Orchard Pen. One gate with the purpose of two! I still need to work out some proper latching, but my quick-fix latch is holding for now. 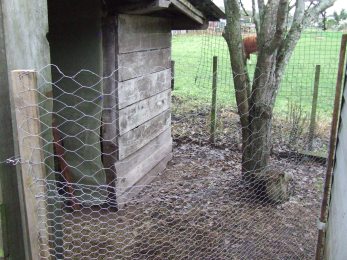 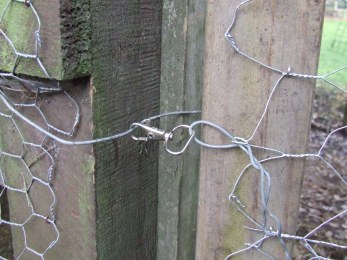 My temporary latch involves wire loops and a little silver clip latch. I will sort out something more functional when I have time. 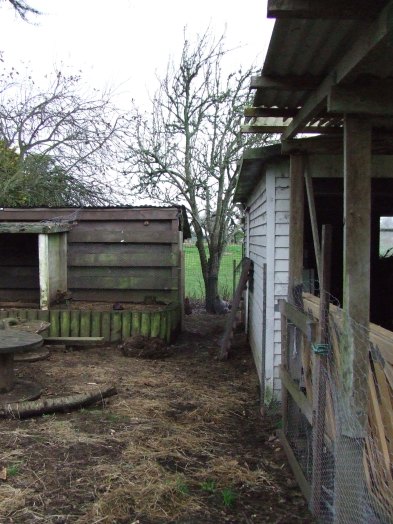 Now we can look at the pear tree and paddock beyond instead of an ugly, plywood pallet.

I am now working on something exciting for the chickens and me. How can I get the chickens to help with the composting process? Stay tuned.