I’m not entirely sure how. The Husband did dig the hole for the apple tree, which I was most grateful for, but as for the rest of it, would you believe… Woodland Fairies? The Husband believes in The Cleaning Fairy, so she’s bound to have some green-fingered friends. Somehow the newest garden bed, the Apple Tree Garden, got planted with the Cox’s Orange Pippin apple tree, some Carex comans (bronze) sedges and all the strawberries that had been living in planters on the deck (Chandler, Camarosa and Sweet Temptation). And some sections of tree trunk were installed for stepping on as well. All it needs now is some mulch. I was inspired by the strawberry patch under a tree at Willow Creek Farm. I mean, the Woodland Fairies were. I am trying to be careful with my back. But it is amazing what you can do crawling around on all fours… 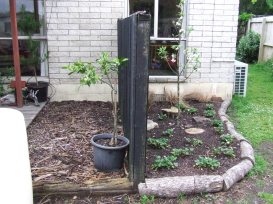 This area looks so much better right now. And it can only get better. 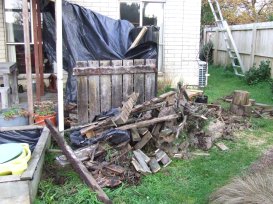 Here’s what it looked like just 4 months ago. The contrast is startling! 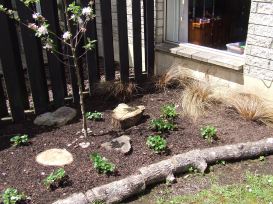 I was originally going to have this garden as an ornamental bed, but you’ve gotta put edibles wherever you can.

The view out the living room window has vastly improved. Even the spiders have moved into some top real estate sites.

The problem now is that I have an idea for more strawberries. 15 plants isn’t nearly enough for a family of three, especially when there’s a pilfering small child lurking around. As usual, it’s another project to add to my list. Let’s just say it involves a stormwater pipe and a fence. Although I dare say we could use more stormwater pipes for other things around here *cough-rain-and-flooding*.

7 thoughts on “A Strawberry Patch is Born”