I’m not sure what happened to Spring. Did it even come? We basically went from rain overload to stinkin’ hot and dry. Oh, Spring, Spring, wherefore art though, Spring? December is usually fairly mild here and Christmas is traditionally cloudy and sometimes rainy, which is quite acceptable to me. But this Summer arrived with a fierceness normally reserved for February. It has been too hot to do outdoor work some days, except for earlier in the morning and in the evening as the sun lowers. Oh, how glad I am that we installed those heat pumps, for the air con is a great help. I’m just not a hot weather person!

Nevertheless, there has been plenty of things to be done, and not enough time to write about everything. Garden watering has become an essential activity, reserved for mornings or evenings. The vegetables are loving the heat and the Vege Garden is looking more full since I finally finished planting out the main round of crops. The Husband did a great job turning the rest of the compost heap and the last of the raised beds got topped up.

Lots of things got planted.

It only took a couple of weeks to go from this…

… to this. And the plants are even bigger now! And the weeds. I have a lot of weeds to war with.

The potato tunnel brought great fun for The Little Fulla. But it wasn’t very practical for walking and watering purposes.

The onions are trucking along.

There is just one red cabbage left loitering in the Vege Garden. The great cabbage offload saw us eating coleslaw almost every day for more than a week, using sliced cabbage in wraps, offloading a couple of cabbages to people and making sauerkraut for the first time. 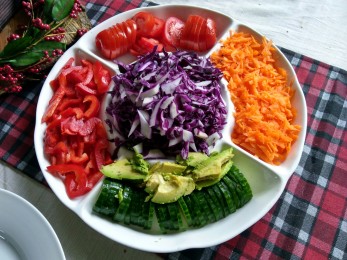 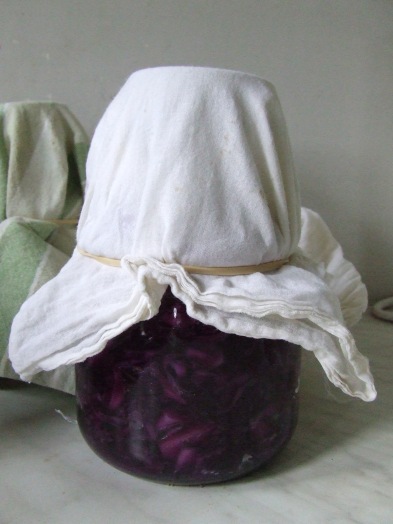 The sauerkraut has been made and now we wait. And check. I did three jars of it and used a small jar inside each to weigh the cabbage down, keeping it submerged.

I’ve been spying out places to plant more veges. The three tomatoes in the Future Patio Area with the giant pumpkin were joined by three gherkin plants. Then four tomatoes joined the pumpkin in the Future Raspberry Bed. Unfortunately, The Winter Luxury Pie pumpkin, the only plant I had of that cultivar, did not survive being stepped on by The Little Fulla, so I replaced it with a Small Sugar pumpkin. That means I have four Small Sugars, two Wee Bee Littles, a Crown pumpkin, which I planted in the corner behind the pruning mountain, and a bunch of Atlantic Giants, five now, I think. There is one in the Patio Bed, one in the compost corner, a self-sowed one in the Cedar Pen, where The Husband unceremoniously offloaded the remnants of my rotting giant pumpkin from last season, and two out the front. Slugs and snails, which I have been battling in a serious way, totally took out the first pumpkin I planted out the front, much too my surprise. Its leaves weren’t even that small. It was a large potted specimen. The cunning critters annihilated it when I forgot to put snail pellets out there. I responded by planting two more nearby.

The self-germinated giant pumpkin in the chicken pen. Let’s see how long this one lasts. 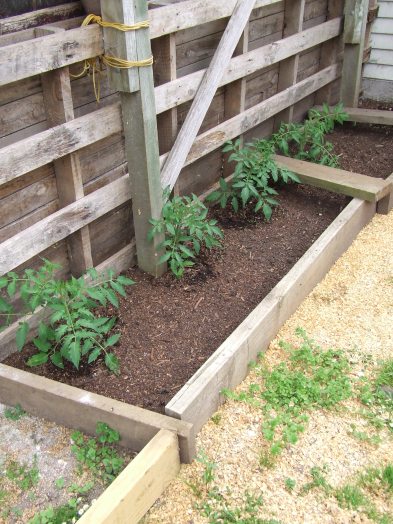 I figured I might as well chuck some plants in the future Raspberry Bed: four tomato plants and a pumpkin down the end, well, two actually, because I transplanted an unknown little self-sown one that popped up by the beans. I’m hoping it might turn out to be a rogue ‘Wee Bee Little’ from the compost.

The Little Fulla and I cleared the rest of the compost heap by mounding the potatoes, topping up other garden beds and filling in the hole left by the carport rain barrel. The Little Fulla’s dump truck was apparently instrumental in this work. Then the ground was leveled out and turned into the planting site for… more tomatoes! Yes. I still had some plants that hadn’t been sold or given away and I figured it wouldn’t hurt to plant ’em. You’re probably wondering how many tomato plants we have now. We have 28. There were 12 in my Vege Plan, and they are in the raised beds, just like in the plan. The four in the future Raspberry Bed and the three in the ‘Patio Bed’ brings it to 19 plants that I am maintaining. The additional ones in the old compost area are going to be my Tomato Forest, left to grow wild so I don’t have to maintain them but can get an additional harvest from them. That’s the idea anyway. We’ll see how that pans out…

The last of the old compost heap was cleared away.

It’s a decent-sized area back here, and I intend to make better use of it.

The Tomato Forest is on the right. The giant pumpkin in the corner is taking off, being now over 3m long. The kumara in planters up the back seem to be doing well.

On the DIY front, hooks were installed on the back of our bedroom door after the rail that we used to hang our dressing gowns on broke. Hooks are so much better. The Husband is currently sanding a door that is to be our new front door. I am pondering paint colours. He put the new rain barrel by the deck up on some wood so the watering can can be filled from the tap. It wasn’t hard to empty the rain barrels with this weather. I’ve hauled some concrete blocks over to the other rain barrel so we can get it set up in place of the lidless black one.

New hooks for our bedroom door.

The new front door has been prepped for painting.

A great feat was accomplished in the Herb Garden. One evening, I revisited my old friend, Stumpy. Stumpy was actually my enemy; the last stump in there, preventing me from being able to finish planting herbs and installing stepping stones. Stumpy had been loitering around through the wet winter, encircled by a moat that was oft’ filled with water. The Husband saw me excavating and hacking away at Stumpy and turned up with all manner of hacking implements. He sure sped things up. Then, the great moment arrived. Stumpy was ousted! Goodbye Stumpy. I would like to take this opportunity to thank all the men who helped dig Stumpy out over the last year: The Husband, The Father and The Little Brother-in-law. It was a communal effort.

The ousting of Stumpy was a great upheaval. Sorry about the poor photo quality – it was evening and we were on a mission. 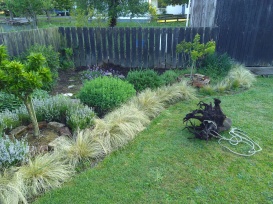 The next morning I smiled with satisfaction at the sight of Stumpy, tamed into submission, sitting beside the Herb Garden in which he just didn’t belong.

I topped up and leveled out the soil, installed the remaining stepping stones, weeded and planted some more little herbs: parsley, basil, borage for the bees and a Cavolo Nero kale, because they just look interesting. There is one more spot for another coloured sage.

The calming lavender belies the turmoil that has just occurred beside it.

Some of the herbs needed pruning as their growth took off, so I used the opportunity to gather some to dry for culinary use. I have had thyme, oregano and a bit of lemon verbena hanging up around the living room. I decided to utilise the hooks that were already up there, supporting the burlap banner, and they actually looked quite pleasing up there, especially in the Christmas season.

I reckon I’ve found a good spot for herb drying.

Bunches of thyme look quite whimsical.

We harvested the Liseta potatoes from the potato barrels. It was a bit of a disappointing harvest as the potatoes got blight sooner than I’m used to. The soil was just too wet in winter and most of spring. The potatoes were still tasty, though. The Agria potatoes in the Long Bed have fared much better. The Little Fulla and I harvested some of them and it was much more pleasant pulling out large, unblemished potatoes in decent quantities. I will leave the rest to mature a bit more.

The Billington plums have ripened much earlier than usual thanks to the hot weather. The first ones usually ripen after Christmas and last year, the cloudy Summer, it was early January, but this year they were 1 1/2 weeks earlier than standard. This is good for the fruit eating thing, but it does mean I suddenly need to make the delicious plum chutney right before Christmas.

The kumara and Summer Delight potatoes are growing well in the newest vege bed, and I even mounded the potatoes nicely.

The early Liseta potatoes got chopped up before I could even weigh them.

We dug out some of the Agria potatoes and used the space to plant the last seedlings that were waiting for somewhere to go: another ‘Alma Paprika’ capsicum and three Cavolo Nero kale seedlings.

What do you do when there’s another scheduled power cut? You harvest plums, potatoes and giant eggs.

The first garlic I harvested was the elephant garlic. I was pretty darn stoked to get such huge bulbs when they were growing next to the doomed, rust-infested common garlic. The elephant garlic didn’t seemed to be bothered by the rust. I haven’t tasted it yet, so I have no idea what it tastes like in comparison, but if it’s any good, elephant garlic could have a promising future in my garden.

The elephant garlic is quite sizable. 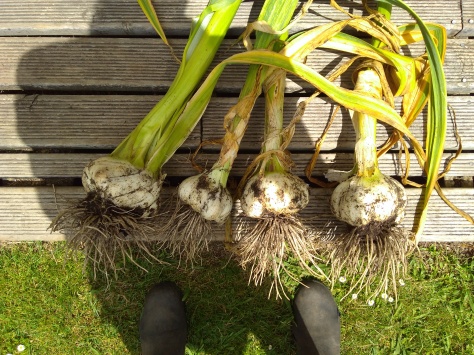 My gumbooted feet, for some perspective.

Next, I harvested the common garlic. And when I say harvested, I mean pulled out the rust-infested plants in disgust. The trimming and copper spray I tried had no apparent affect, although some of them might be slightly bigger than last years’ tiddlers. I ran out of time to try spraying diluted colloidal silver on them. I think the common garlic has run its course in my garden. It’s just too wet. Unless I plant them at a different time of year like The Father-in-law. He might be onto something.

Meanwhile, there have been movements in the chicken flock, good and bad, and Christmas is almost upon us! There is so much going on but so much to be grateful for.

3 thoughts on “Being Productive in The Sweltering Heat”