There were holes and mounds of dirt all around the property yesterday. I’m sure it looked like we’d been visited by a giant mole, even though I’ve never seen a mole or a mole hole. Yesterday, a stump grinder graced us with its grunty presence.

We really should have hired a stump grinder sooner. It makes short work of large and plentiful stumps. We just didn’t want to fork out for one. When I got the chance to hire some equipment for 20% off I immediately thought of a stump grinder, given our current need to get rid of at least one big feijoa stump in order to site the next firewood rack. In the few hours we had it, the stump grinder ate into:

And we could have gotten rid of more in that time if we’d needed to. The Husband did an awesome job operating the stump grinder. It is extremely satisfying getting rid of so many stumps in such a short space of time, knowing full well how long it takes us and how hard it is to dig them out by hand.

We couldn’t grind up all of the feijoa stumps because the fence was built right over top of all of them. We will never understand why someone would build a fence without removing large stumps underneath it, or at the very least killing them. The Husband is now trying to get rid of the parts of the stumps close to or under the fence with his chainsaw, which is very difficult. Hopefully we can get rid of enough of them to stop them from resprouting. There are actually three more feijoa stumps along this fence in the Maple Garden, which haven’t resprouted as much due to being smothered by plants, so I’ll have to come up with something to kill those with anyway.

Here are some photos of our exciting dirt-filled day.

The Husband started with the most important stump to get rid of: the feijoa stump where firewood rack #2 needs to go.

Dirt, holes and the feeling of satisfaction. 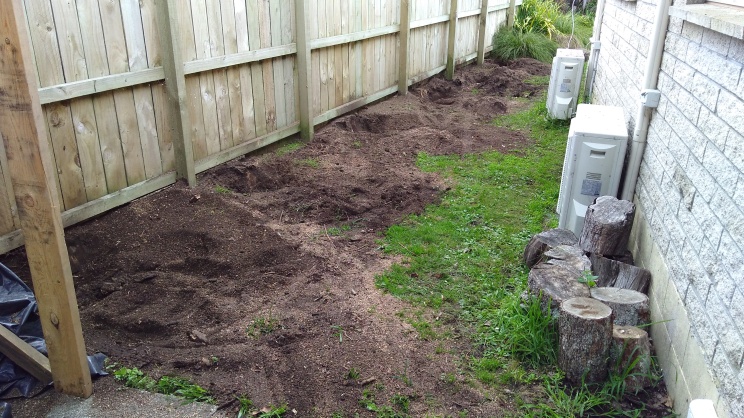 Have you ever seen that movie with the giant earthworms?

There used to be a large stump here on The Mound in our front yard. Now we have some great garden mulch.

The stump on The Mound was the biggest one we had on the property, although it was rotting rather than resprouting, so it wasn’t the highest on our hit list.

There was a stump under the fig tree, which hadn’t bothered me much yet, but why not get rid of that too? Yup. 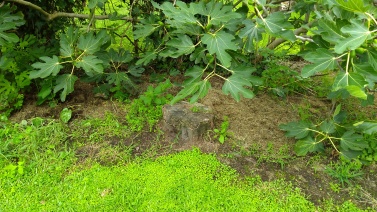 The stump under the fig tree.

The non-stump under the fig tree.

The camellia stump that was in the corner of my Plant Alcove is gone. Oh, so much satisfaction!

We got rid of most of the camellia stumps in the bit beside the front carport. This is extremely helpful for future parking space work. We just couldn’t get to several that are under or partially under the Stone Pile on the left. Yes, that’s still there…

It was The Weekend of Dirt really, winding up with the grand finale of removing the large stump from the corner of the raised garden that we’re demolishing in the chicken pen. Woohoo! We’ll save that for later. We’ve all been coated in a lot of dirt this weekend and had a lot of showers and baths. Tomorrow, I will be cleaning.