Pumpkin reckoning day approaches. The Great Pumpkin Carnival is on this Sunday, in two day’s time. After last year’s carnival, with the taste of victory in my mouth as I took away the title of Best Mature Miniature Pumpkin: Open Class, I was fired up to enter anything and everything I could and to grow my giant pumpkins ‘properly’, with diligent care and optimum conditions. Then the realities of life with a small child and a yard full of work and projects set in. I faced choices like this:

Tough questions, I know. So, my competitive pumpkin plans had a bit of a reality check. I will not be hauling away mountains of accolades come Sunday. Nevertheless, I will be entering as much as I can, given the small child’s current adverse health situation, which seems to require his parents not getting as much sleep as they would like.

My biggest giant pumpkin, growing in ‘The Jungle’ (the old compost area) has come to a sad end. When The Husband and I moved it away from the fence it was pushing out and onto a blanket, which was necessary for any hope of transportation, we partially severed its stem connection and it couldn’t hang in there. It has deflated as it rots away, along with my pride. This is the second giant pumpkin loss, after the one on the deck that fell pray to The Little Fulla. This one was a lot bigger than last year’s one. Never mind! I had enough foresight to plant two other giant pumpkin plants out the front, which each have one pumpkin, plus the one in The Jungle actually produced another secret pumpkin child that is growing on, ahem, the neighbour’s side of the fence. None of these pumpkins are as big as the one in The Jungle was, but I currently have three options, so that’s something. 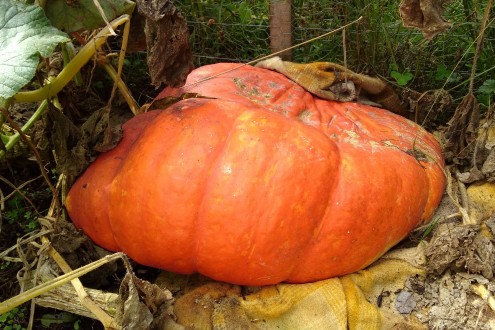 The biggest giant pumpkin I grew this year. ‘Grew’ being the key word. It was a pretty decent size before it collapsed. So long, dear pumpkin. 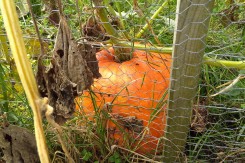 The secret pumpkin child that the same plant grew, just on the wrong side of the fence. Oops! 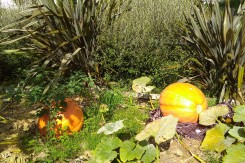 The two giant pumpkins out the front.

The two Wee Bee Little plants I managed to get from the ill-germinating seeds did me very well, producing many miniature pumpkins, 28 in total I think. It may have been 29 or 30 but I can’t remember how many we’ve eaten.

A lot have marks on them from being in contact with soil or stems, but I will have a look through to find the best contenders.

I have a couple of little pumpkins that could enter Lightest Mature Miniature Pumpkin.

A Wee Bee Little pumpkin, one of the last.

There are little pumpkins lurking in shady places. Will any of them bring me a prize?

So far, I have managed to roast some pumpkins to turn into puree. Yup. That’s it. This soon-to-be puree will hopefully make its way into some form of baking before the carnival.

None of the Small Sugar pumpkins are good enough to enter Most Perfect Pumpkin due to marks on them, but they are being used for the baking.

The Husband is planning to help The Little Fulla to make a Pumpkin Racer out of one of our pumpkins. As yet, I don’t know if the plan has any more details than being a plan.

I don’t think I have any pumpkins that are weird or ugly enough for Oddest Pumpkin. I should have subjected some of them to some kind of strife. Although, the ‘small’ giant pumpkin that had the misfortune of growing itself in the chicken pen is looking pretty scarred, so maybe that’s a possibility.

I don’t think a Best Pumpkin Creation or Best Carved Pumpkin is going to happen, unless The Husband wants to have a crack at that too. 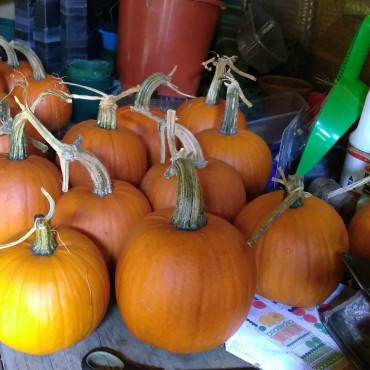 My potting shed is being taken over by orange things. These Small Sugars look pretty good from further away…

But this scarring will not a pumpkin winner make. Unless it’s in some baking. 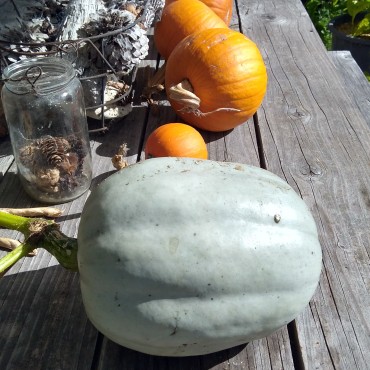 Could this Crown pumpkin become a pumpkin racer?

The comparatively small giant pumpkin in the chicken pen, which has survived thus far, much to our surprise.

I’m actually getting quite excited thinking about it all now. I just need the energy and time to get cracking with the possibilities! What’s going to happen? It’s anybody’s guess. But I hope an orange swathe is coming…

4 thoughts on “Will There be a Swathe of Orange?”