We’ve had a couple of beautiful frosts here this week. 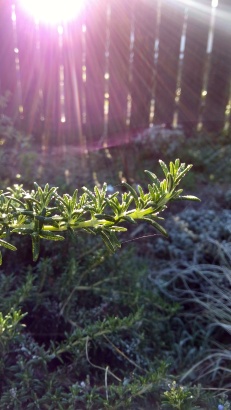 The frost is also descriptive of my feelings towards the neighbours’ little bull right now. I thought I had rescued my sedges and fence from his hungry, reckless attention, but no. I was shocked to find him eating the sedges again, worse than before. I was confused, as I noted that the top of the fence was intact. That stopped him reaching the plants from the top, but do you know what he did? He pushed up and warped the wire netting from the bottom, where it wasn’t attached very strongly since I thought the top of the fence was the problem, gaining access to the bottom of the plants, which is far more serious. Rooted pieces have been ripped out and plants have been chomped. My once graceful sweep of sedges now looks little better than the trampled winter paddock behind it.

I ran out there in the rain, with a bit of hail thrown in for good measure, working frantically to straighten and staple down the wire netting whilst trying to stop the sick child from coming outside. I leaned some planks across the bottom of the fence too, but I will have to attach some more permanent ones later. Such was my anger-fueled determination that I came out with stinging cuts from the sedges on my hands and arms because I was in too much of a rush to put on gloves and roll down my sleeves. Oops.

How to make a Twiglet angry. 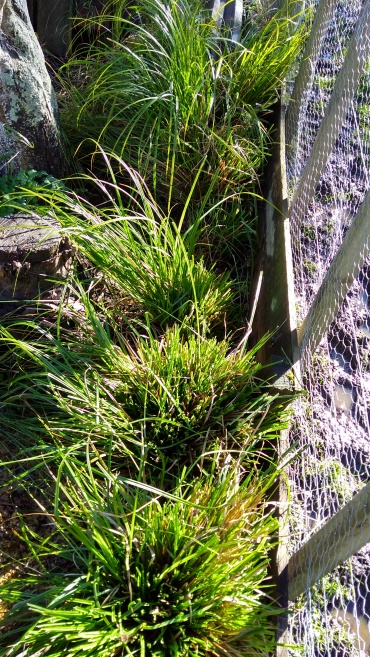 Moving on to the egg-laying exploits of Annie… I found this egg in the coop one morning. It was Annie’s.

How this egg got to be on an angled ramp, partially broken but still perched there is beyond me. But that’s not all. This was the last egg Annie laid in the coop. There were a few days without eggs from her and then I found four of her eggs IN THE PEN. Just on the dirt, off to the side. Not even in any vague attempt at a nest. The next morning I was preoccupied with the sick, small child and Annie left an egg in the pen again, in a different spot. I tried to shut her in the coop the next morning, but in my rush I didn’t block off the door properly and she escaped. And left another egg in the pen, in a different spot, just on the dirt. Annie!!! Are they coming out too fast for her to realise or is she just like, “Oh, this looks like a good spot to deposit a butt nugget”?

Betty is doing well and is back with the others without too many scuffles. I have grown very fond of her through treating her foot. We quickly developed an ‘understanding’.

The chicks have been getting very frisky in the mornings when I let them out. They jump and fly around and try to get one up on each other. 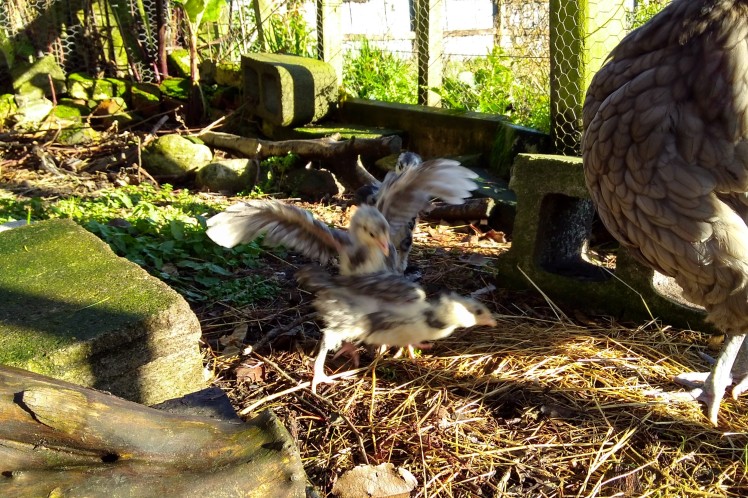 I let Frodo and the chicks into the small Feijoa Pen while I did some things. Things that I will talk about later while I’m not just about falling asleep in my chair. The chicks are at the funny-looking vulture stage, which is more pronounced when they’re in alert mode. They’re just on five weeks old now. My, time has flown. I need to figure out what to do with them and Frodo in terms of the rest of the flock. Being let into an adjacent pen after quite some time resulted in a couple of feisty fights between Frodo and Paris through the fence. Paris is going to be trouble then. She’s quite similar to Lydia, really, a little bit too bold and dramatic, but this time I have no rooster to help sort out the fighting. Hmm. 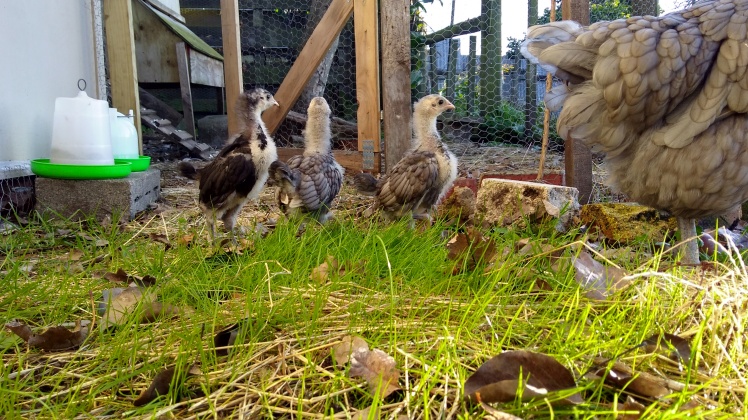