There seems to have been an endless stream of vegetable seedlings being planted and somehow they’ve been finding places to go. I’m actually amazed at how great the Vege Garden is doing considering recent circumstances. The Little Fulla and I dug up more lawn along the front of the Cedar Pen and planted three more Wee Bee Little pumpkins. Because I’m sure we can never have enough of them, right? Let’s do a count of the orange swathe:

I accidentally pointed the Wee Bee Little pumpkins towards the tomato frames instead of the fence. Oops. Everything else was planted in the right direction though.

This could be a giant pumpkin one day.

Pumpkins, before they get wildly out of control.

Pumpkins and squashes are really such space hogs, I think that’s all I can fit in. I suppose 22 is enough. Apparently the slugs and snails heard me triumphing over them in battle. I’m not sure if it was a solo assassin or a regiment assignment, but they took out the Pink Banana Jumbo squash out the front by attacking it at the jugular – on the stem below the first leaves. Fortunately, I had a plant to replace it. I surrounded it with a fort of snail pellets.

There isn’t anything left to plant in the Vege Garden for now, except I would like to squish some more broccoli in somewhere. And I should probably plant more lettuces, even though I have heaps, as they can go to seed very quickly in our hot summers. The climbing beans are supposed to be giving the main lettuce patch some shade. Thanks snails.

These parsnips probably need to be used sooner or later before they shade out the tomato too much. Parsnips grow so fast here.

The capsicums are a little it nibbled but none have been destroyed.

I love the colour of these lettuces, obviously. They’re everywhere.

The cocktail onions are getting a little bit more than cocktail size. 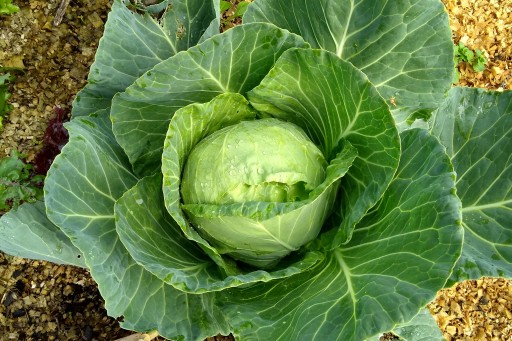 This lovely cabbage was grown from seed by The Little Fulla. I don’t know what variety it is. We have been eating a lot of savoy cabbages and a few have been given away. There are still some in the garden that need to be used in the near future. 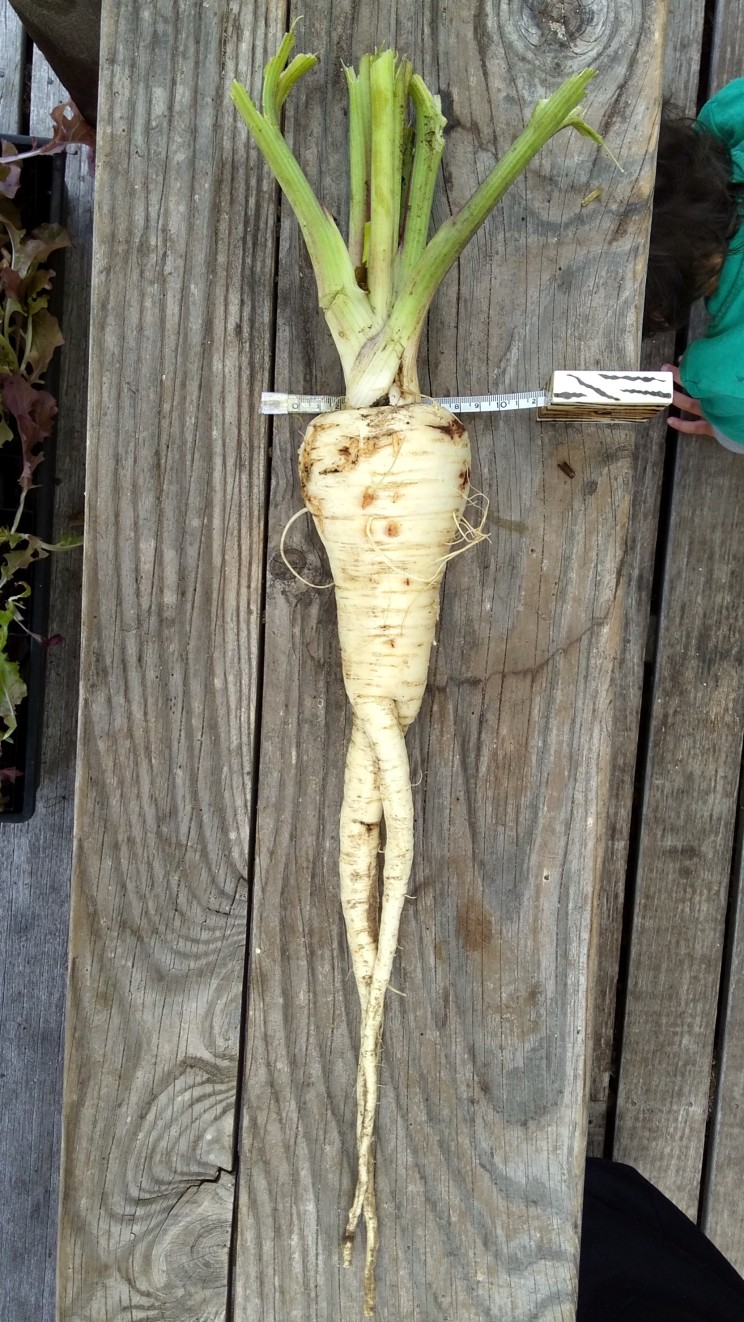 This parsnip was allowed to grow for a while because I was waiting for it to go to seed so I could save some. It didn’t. It just got fatter and longer and when I had had enough of its noncompliance it put up a fight when I dug it out. Diameter at the top: 8cm.

The other thing I’ve been doing is spreadsheeting. After I inserted the in-progress spreadsheet of The Great Vege Garden Expansion Plan into a blog post and noted that I hadn’t even drawn the old compost corner onto the plan yet, well, my mind couldn’t let that go. So I measured up the area and drew it onto the spreadsheet. And that meant I could start fiddling around with the layout and thinking about what was important to fit in there. Do I still really need to build a double barrel composter since I’m planning on compost bins in both chicken pens, or would a single one do? Do I need one at all? More raised beds will need to be built. And now we have a stainless steel sink and bench waiting to be set up outside for processing chickens and other outdoor purposes. And I needed to move a tree. That’ll teach me for not putting it on the spreadsheet!

Fortunately, the nectarine tree planted next to the Potting Shed is still young and wasn’t planted too many months ago… 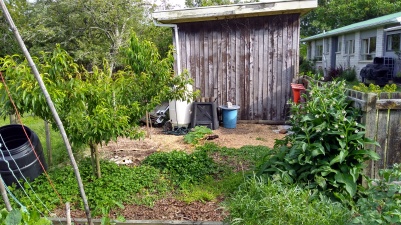 Because it had to make way for the new outdoor sink, which will be going alongside the Potting Shed.

We’ve also been constructing the latest set of raised beds, alongside the back carport. Work halted when we ran out of nails so I set to working on the rest of the plan down that end on the spreadsheet. Trying to fit an awkward-shaped bed in with angled edges to keep a nice flow from the curved edge of the Herb Garden was just not working for me. Stuff a flowing edge! Why didn’t I just take the garden out a bit further to have a nice 90 degree corner? Out spurted another four scale versions of how it could be constructed. The chosen one is the simplest and most functional. It carries on from the long bed we’ve been building, the same width, up to the line of the Herb Garden/Vege Garden fence. The gate will be beside this. Then we’ll extend the Long Bed out a bit further towards this other bed for more growing space.

This was just not working.

Testing out a better plan. I’m trying to decide whether the closest bed would need to have an angle or not,. Straight would obviously be better, but the gate space beside it would be a little smaller than ideal.

The new set of raised beds has been completed. I did most of the work myself. The final run saw me hammering away at it one Saturday while The Husband made cookies with The Little Fulla. We’re multifaceted here. The new beds have been partially filled. 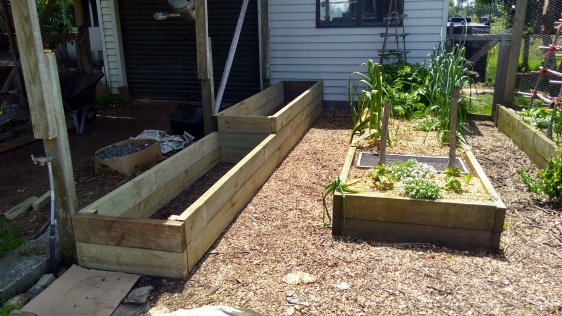 Ta-daa! Oh, now we have to fill the beds.

Using cardboard to cover the grass and mark out the future development zone.

The Husband cut up the trunk and large branches of the felled kanuka tree with the chainsaw for firewood. Then I found a mulcher for a rather good price – $50. So we now have our own mulcher, just in time to mulch up the rest of the felled tree branches before they get too old. And before Christmas. I’d been on the look out for a mulcher ever since we borrowed our friend’s one. And since The Husband broke the mulching part of our lawn mower. Twice. And it has not been fixed yet. The Husband sharpened the blades of the new (to us) mulcher and it goes well. Since The Husband has been down and out with sickness, I plodded through the mulching with my little helper until all the branches were GONE. 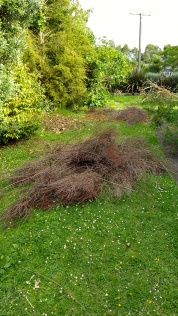 Part-way through the mulching of the kanuka branches. Note the walnut pruning mountain still lurking in the background.

Scenes of mulching and cutting. I cut up the bigger walnut branches with the circular saw, stacked them on the wood racks and mulched the smaller branches.

All I wanted for Christmas was no more pruning mountains. Well, at least that’s one of the things I wanted. This is a sight for sore muscles.

It’s set to be a rainy Christmas, which is quite normal, and fine by me. I don’t mind if it rains when it’s hot and humid. I’ve mowed the lawns and done a full clean and spray of the main coop so I’m feeling good!

8 thoughts on “The Vegetables March on”