This summer was intense: intense heat, intense humidity and intensely waiting for rain. Now autumn, my favourite season, is upon us. While the heat is less intense, it’s still very humid and we’re still waiting for more rain. The Indian Summer this year meant mornings and evenings started getting cooler sooner than usual, and some plants haven’t liked this, even though it’s still been hot during the day. The cucurbits: pumpkins, squashes, cucumbers and melons, have been curling their toes up early. The powdery mildew really whacked them this year and the cooler mornings and evenings on top of that were the final straw for many of them.

I am interested to see that my Jack Be Little-Small Sugar hybrid pumpkins, which I am going to call Small Jack, have coped significantly better than all the others. They did get powdery mildew but they have plenty of fresh green laterals still growing and they are still fruiting. They are very vigorous. We haven’t tasted them yet, but if they taste good there’s definitely reason to keep that strain going. 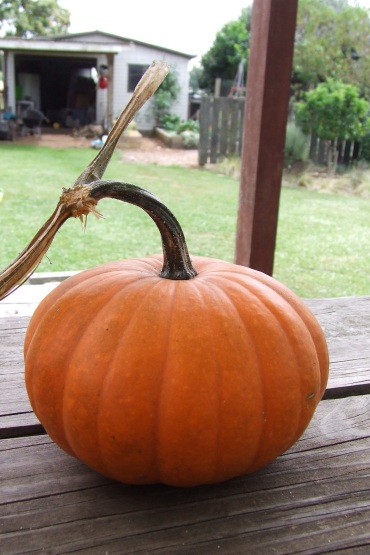 The Small Jack plants are soldiering on. I have to keep pushing the laterals off the paths and back into the garden.

I have been reading up about cross-pollination within the cucurbit family. I didn’t know they cross-pollinated so readily, as this season is the first time I’ve had trouble with it. Next season I’m going to have to plan things a lot more carefully. Here are the pumpkin and squash species and some of the cultivars or varieties they include. Varieties within the same species can and will cross-pollinate quite readily when grown in close proximity.

If you grow these from bought seed every year, it doesn’t matter. But if you want to save seeds from your cucurbits to grow the next year, which is always a great and thrifty idea, you need to know which species the varieties you want to grow are in and take measures to separate or isolate the plants or flowers from each other. This is especially important in New Zealand, as stricter Biosecurity measures mean seeds of some varieties are no longer available commercially.

Last season I had Small Sugar pumpkins cross-pollinate with Wee Bee Little’s and Jack Be Little’s. You don’t know until you grow a plant from the seed. I am fortunate that some of the Wee Bee Little seeds I saved were pollinated true and grew true to type, otherwise I would be screwed! This season, I had all sorts of things grown nearby each other, so seed saving is going to be strict or risky.

So, next season, some things will have to be separated far apart or planted two weeks or more apart. I am going to have to be careful. I can’t plant all sorts of pumpkins willy-nilly, however much I want to willy-nillily grow all kinds of fascinating pumpkins. The Vege Garden could house our precious Wee Bee Little’s, Butternut squashes and Pink Banana Jumbo squashes. Giant pumpkins will all have to be grown out the front. They can no longer hog space in the Processing Corner anyway. They’re too nuts. Another small pumpkin variety could be grown out the front. Or spaghetti squash. And more Butternuts if I need to. But there are so many pumpkins I want to grow! Why are there so many pepo’s? And why do they have to fraternise with each other? This is going to require more spreadsheets. Excellent.

Many of our pumpkins and squashes have been harvested, but some of the plants are not quite dead yet, so I’m leaving the fruits to ripen as much as they can.

The giant pumpkins aren’t particularly giant at this stage. The dry weather hasn’t helped them, nor the powdery mildew. The plants are still hanging in there though. There is one pumpkin out the front and two in the Processing Corner. It has been a mission culling other fruits off the plant in the Processing Corner. You really have to keep an eye on them. As it is, the plant has had to put energy into two fruits. I think I’m going to cut one off now to see if I can stuff some more growth into one of them before the carnival. I’m not holding my breath though. I have my sights set on other categories. And The Husband and The Little Fulla have their sights set on a pumpkin racer. The Great Pumpkin Carnival is now only two weeks away. Ahhhhhh!

James And The Giant Peach? Nope, just a giant pumpkin sneaking into the peach tree. Oops!

The giant pumpkin in the Processing Corner is hogging a lot of space again.

This one has the nutrients all to itself, although it has less fertile ground than the others. Not much effort put into this one.

7 thoughts on “How Goes The Swathe of Orange?”