We’ve been having a few technical difficulties here. My computer had a series of fits and then it promptly died. Fortunately, I have The Husband, who has been hard at work building me a new computer. So, I think we’re back on track now!

The day before the Great Pumpkin Carnival was once again full of preparations, baking, excitement and some stress. While I set off the morning by making a pumpkin cake, The Husband and The Little Fulla began building their pumpkin racers.

First, the pumpkins (or squashes) were painted. Then the engineering began. A pumpkin racer has to have two independent axles and is not allowed to have any kind of prefabricated platform. This was all very exciting to The Little Fulla, especially when they got to do some test runs down the slide. The Little Fulla loudly announced to the whole world, or whoever could hear him from the backyard, “WE HAVE PUMPKIN RACERS! WE HAVE PUMPKIN RACERS!”

They were having more fun than I was, as I wasn’t happy with my first cake. I made another one. Does that sound familiar? To cut a long story short, I then made a pumpkin pie, the first one I’ve ever made, then iced the cake (the better one), then made pumpkin scones. I had achieved the baking trifecta. Fortunately, I had selected my pumpkin entries a day earlier. They just needed to be tidied up. Then the pumpkins and racers were boxed up, ready to go. The baking was plated or containerised, ready to go. All that remained was to cut off and weigh the giant pumpkins in the morning to see if any had miraculously grown heavy enough to take. 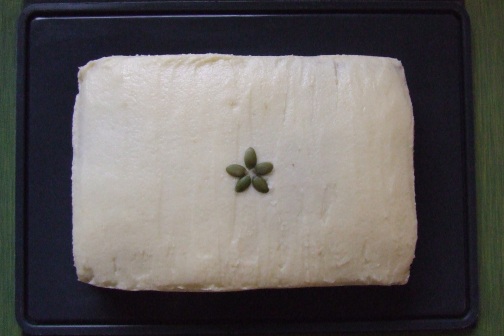 My biggest giant pumpkin was only 20-something kg, so we did not take a giant pumpkin with us. They really didn’t get enough water this year thanks to our drought woes. We were more organised this time and arrived at the Gardens decidedly early; early enough to get a good park, sit down for morning tea and play on the playground before registration opened. The pumpkins and pumpkin racers were registered first, then it was back to the car to get the baking entries. With everything done it was time to relax and enjoy the day.

There were markedly less pumpkin entries this year, which was a bit sad. Last year there were heaps of pumpkins in the different classes and lots of creative entries in the Best Pumpkin Creation and Best Carved Pumpkin categories. There were plenty of baking entries though.

We were quite taken with this pumpkin cow.

This colourful creation was a winner.

The Micky and Minnie pumpkins charmed the judges. 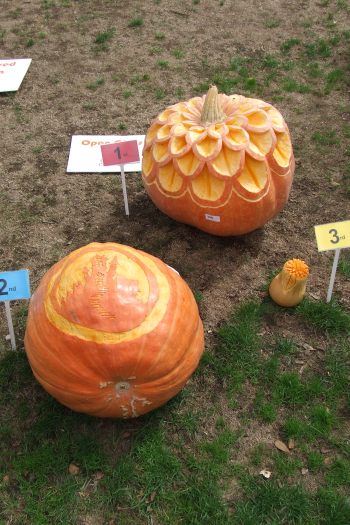 Some of the baking entries.

How can you compete with a pie like that one at the back? I’d like to eat that pie. 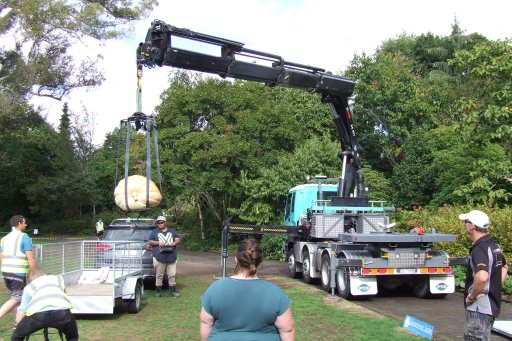 The greatest pumpkins have to be lifted like this.

We were eyeing up the biggest giant pumpkin sitting on a trailer, wondering if it was Tim the Pumpking’s one. It wasn’t as big as his one last year. To make matters more interesting, it was sharing a trailer with a much smaller giant pumpkin. Was that possibly his 2nd-placer son’s pumpkin this year? When the time came to weigh in the biggest pumpkin, the plot twist came out. The smaller one on the trailer was the Pumpking’s one, which he was obviously disappointed with at only 54 kg. The biggest pumpkin was his son’s, which took out the grand prize of Heaviest Pumpkin Over 200kg – the only one in its class. It weighed 596kg. That is very impressive, although it was less than his one and his dad’s one last year. It was evidently a tricky season for some other people too. I later found out that the Pumpking had grown a whopper pumpkin that could have rivaled last year’s record-breaker, but it started rotting two weeks out from the carnival. Poor dude! That would be so gutting! Part of the thrill of pumpkin growing is that you never know quite what’s going to happen or what your pumpkins will turn out like. 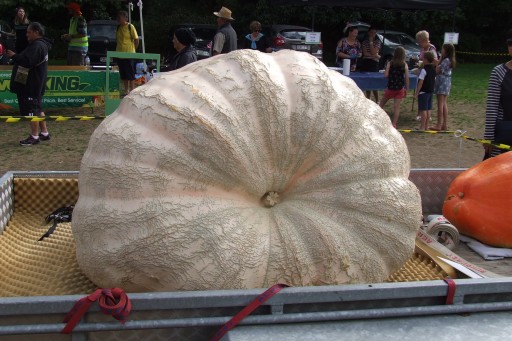 The most giant giant pumpkin. 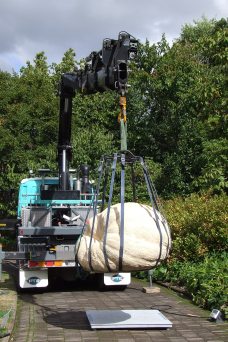 DNow, this is one dedicated pumpkin grower.

Upon returning to the main pumpkin classes area, I found that the judging had been done. My mini pumpkins didn’t get anywhere in their class but I was elated to find that I had won 1st place for Most Perfect Pumpkin! This is the big kahuna for me. You never quite know how a miniature, or semi-miniature, pumpkin will fare against all kinds of bigger pumpkins. And squashes. Next, I found that The Little Fulla had won 2nd place in his class for Oddest Pumpkin. I’m still trying to explain to him exactly what that means, but he knows he grew it in his garden and that it did well in something to do with weirdness. 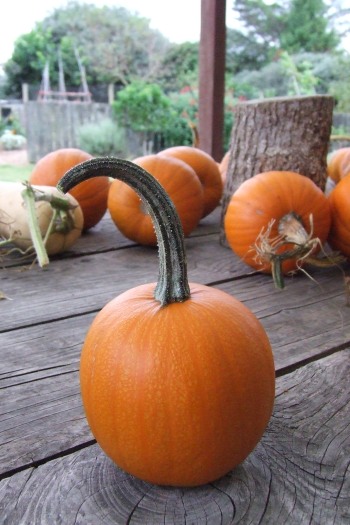 No prizes for my minis this year. 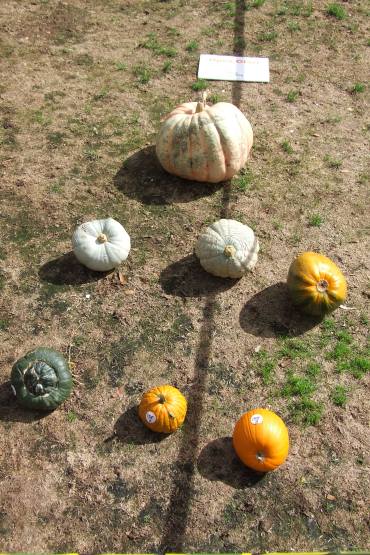 Choosing my most perfect pumpkins. 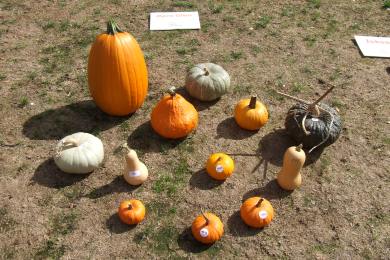 The Little Fulla’s oddest pumpkin, which he grew in his vege garden.

Oddest Pumpkin, 12 Years & Under. The Little Fulla’s pumpkin got second to the big weirdo one.

Next came the moment The Little Fulla had been waiting for: the pumpkin racers. There are only two classes: open class and schools. The Husband’s hefty ‘Pickle’ racer started off well and had to have a re-run against the eventual winner. However, its weight and the action of its axles rubbing bigger holes after The Husband’s second drilling attempt on the morning of the carnival to make the wheels straighter saw it bow out. It would have been good for long distance, but this race is a short ramp coming out on a sharp angle.

Then came The Little Fulla’s little butternut racer, ‘Stripes’. We didn’t exactly have high hopes for it, as the wheels were just light plastic ones with thin metal axles, which used to be part of a plastic wagon toy. They weren’t even held in alignment with anything. But it was cute and fun. I actually bought the butternut at a shop (this is allowed) because its shape caught my eye. Well, that little butternut was a good investment. It sailed past its first two competitors. It was so exciting! It ended up in the final race-off for the open class. We all cheered but alas, little Stripes was beaten by a carrot-nosed green speed machine. The winner then went on to race the winner of the schools class.

Right after the pumpkin racing had finished, a great downpour began. People scattered and we found ourselves huddled under a gazebo like sardines with a bunch of other people. The Husband did a sacrificial run to the car for the wet weather things and the pumpkin carrying box, then we awkwardly set about gathering all the pumpkins and baking while trying not to get too wet. The Little Sister was there to give us a hand so we managed to gather all the things in one go. There was no prizegiving ceremony because of the rain and the rain set the tone for the baking results: I did not get any placings for my baking. Back at home we dried out and I began the great task of unpacking, storing baking in the pantry, fridge or freezer, and clearing up all the mess.

It wasn’t until the next day, as I perused the carnival results page, that I remembered there was more than just a first place for the pumpkin racers. We were so caught up in the excitement of the races that I didn’t even register that The Little Fulla’s wee racer had got 2nd place. Woohoo! He was most impressed with this discovery. We received our certificates and a small prize for my 1st place pumpkin in the mail.

I am already having thoughts about next year’s Great Pumpkin Carnival. I may bow out of the baking classes for a while, as it’s so much work the day before and the competition is great. According to myself, my family & my non-family member guinea pigs, my baking tasted good. And that includes an endorsement from an American, because Americans truly know the value of a pumpkin pie. That is enough for me, to know my baking wasn’t terrible and it has brought people joy.

But do you know what happened to my cake upon arrival home? The Husband dropped it, spilling half of it onto the ground and car. Perhaps that was the final nail in the baking coffin. I would rather have fun with pumpkins with my family the day before the carnival and would like to try my hand at pumpkin carving and a pumpkin creation, especially now that they have a family class for Best Pumpkin Creation. One thing’s for sure: with each Great Pumpkin Carnival, my love for pumpkins grows ever greater and nuttier. If only I could figure out how to fit ALL the pumpkin varieties into my garden without cross-pollination…

5 thoughts on “The Great Pumpkin Carnival”