After much anticipation, chicks started popping out all over the place. For the first time, the incubator trumped Frodo in hatching ability. I did feel like the incubator and I had come to an understanding. That’s why I left more in there than I gave to Frodo at lockdown time.

Frodo hatched four of the seven eggs she was sitting on. At one point before hatching began, I found two of the eggs poking out the side of her, not covered properly. When I checked back some time later, they were still sticking out but one had a big smear of poop on it (one of only two eggs from Blaze) and the other had a wee bit on it. Oh dear. I pushed them back under her and hoped for the best. Then, after the first four chicks had hatched, I found her off the other eggs. I quickly transferred them to the incubator, not holding out much hope for them. Two were the sidelined poop victims. Frodo had some similar issues last time with eggs not covered well enough and getting off the last few eggs before they hatched. I put it down as a slip up. Now, I’m admitting that Frodo might be losing a bit of her hatching ability as she ages. Next time, she ought to only get a few eggs to hatch. She is still a fantastic chick raiser.

Meanwhile, in the incubator, all of Jemima’s five chicks hatched and four of Tiggywinkle’s. Then the one Dorking cross egg that I left in the incubator started hatching from the wrong end of the egg, which is particularly narrow in the habit of Moppet’s eggs. I watched, eager to help if needed, but restrained myself as the chick managed to push its way out by itself. Hooray! That left one Tiggywinkle egg and the three transfers from Frodo. The last Tiggywinkle egg turned out to have a chick that had stopped growing well before lockdown. So all the incubated eggs that kept growing to lockdown time hatched out. I’m extremely happy with that. 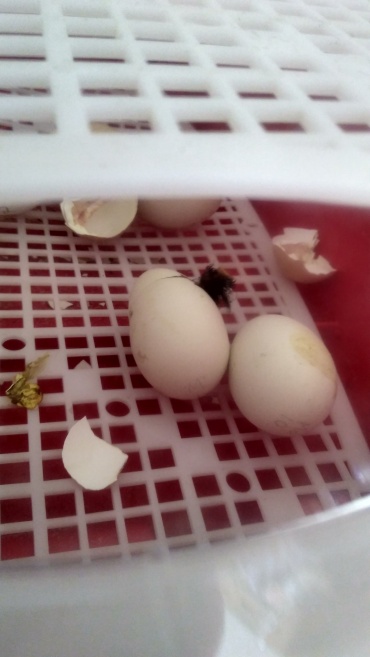 The Dorking-Sandy Whiskers chick pipped at the wrong end of the egg. It had a wing poking out as if to say, “Help me!” But I knew well enough to let it push its own way out if it could. 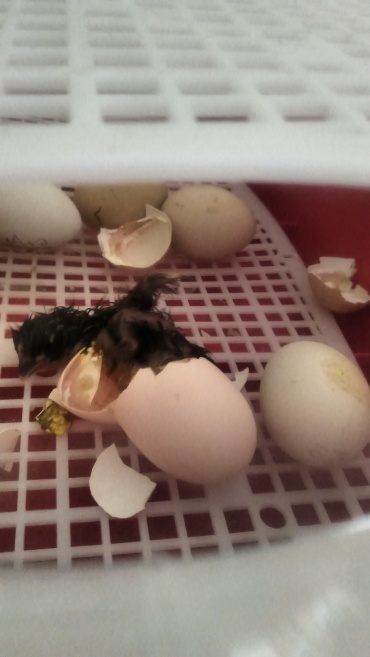 Back to the transfer eggs that Frodo abandoned. To my great surprise, the poop egg, Blaze’s egg, pipped. Then one of the two Dorking cross eggs pipped as well, again at the wrong end. The Blaze chick hatched: a blue chick. Yay! I couldn’t help but call it Winnie the Pooh. The Dorking egg was another matter. It sat and sat and eventually I began to assist, a little bit at a time, over many hours. Eventually, the little black chick came out, very late, on Day 25, but it was weak and had problems and I ended up having to make the tough call with it. That left the other egg transfer from Frodo, which grew to hatching size but didn’t hatch, probably because of Frodo’s incubating blunders. Winnie The Pooh was a little weak to start with, being slow to hatch, so I gave him some vitamin water and kept a close eye on him. He required another stint in the incubator to keep warm and gather strength before going back to Frodo. He appears to be doing well now, along with the other chicks.

So, we have a hatch of 15 chicks, which Frodo is raising. Here’s what we have:

I can confirm that the late Sandy Whiskers has indeed fathered some chicks, as two of the Dorking cross chicks have rose combs. It isn’t particularly exciting that they’re all black, but we’ll see how they turn out. I have different ideas for future directions of the Dual Purpose Meat Bird Side Project that don’t involve a black chicken…

Four of the young crossbred Paris boys have now been butchered, leaving two to go. I find it’s easier for me to butcher two at a time when it’s just me and The Little Fulla. He helps pull a few feathers off and gets the plastic freezer bags out for me, but otherwise just likes to play around, touch everything and ask endless questions about all the different parts of the chicken. We enjoy eating homegrown chicken as, apart from the fact that it tastes better, The Little Fulla likes to re-enact the life of the chicken at dinner time. He makes one of the long drumsticks walk around upright on his plate whilst making chicken noises, among other things. We never know what he’s going to do next and it is quite amusing. We have two crossbred boys left to butcher, then just the purebred boys to grow on a little bit to assess their quality.

I finished making the gate for the Vege Garden and acquired the hardware to hang it: a latch and hinges. I chose black for both as it looks nicer. When I was making the gate I ran out of thin timber so did the cross with some old weather boards. Do NOT do this. Unless you want to get frustrated with the uneven plane and end up doing weird things. The gate was fairly easy to hang, or it would have been if The Little Fulla hadn’t kept touching and moving everything. I chose a self-closing snap gate latch so it shuts fast when the gate is pushed. The Little Fulla was particularly thrilled upon the finishing of this project. Apparently opening and shutting a gate is very exciting. I also fenced off the small gap behind the potting shed with chicken wire, so now the entire Vege Garden really is enclosed. Woohoo! 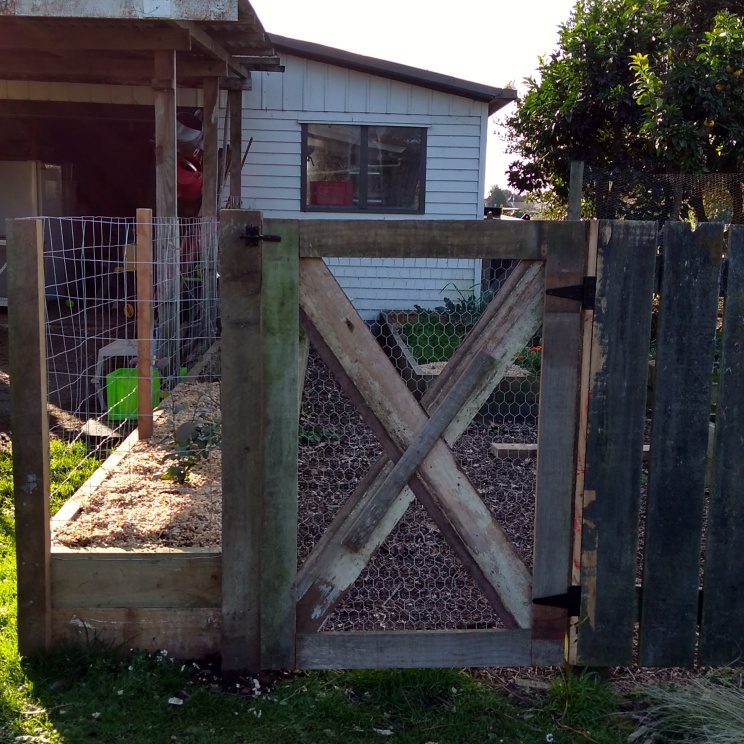 It ain’t the most high-end gate, but I’m pleased with it. 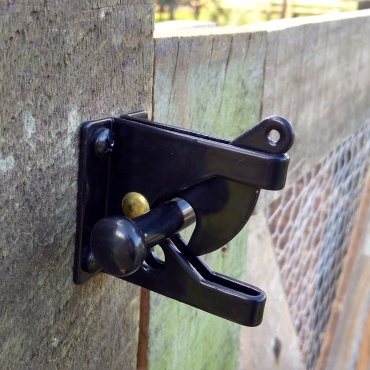 This snap latch was a good option. 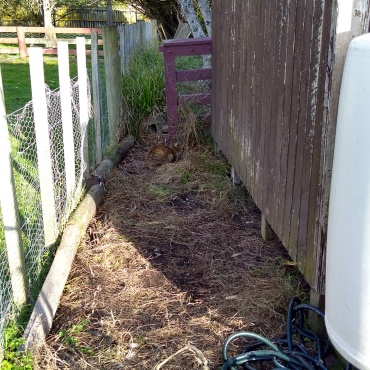 The spot behind the potting shed has been cleared of all timber and other bits. The gap where Nala is has been fenced off and I am thinking about what to do with this space. The current frontrunning idea involves a berry bed.

There is a bit more fencing on the horizon. I started installing some wire netting along the east paddock fence between our place and our neighbours, from where I had previously stopped just past the plum trees, heading towards the front of our property. I didn’t get very far before my supply ran out. I started on this after one of the neighbours dogs, the young one, came through the fence wires and chased our kitten, Simba. Since starting up the fencing again, I caught the dog attacking one of the neighbours’ own chickens near the fenceline. I yelled at the dog and scared it off and the injured chicken disappeared, but I guess the dog got it again, as the neighbours discovered upon arrival home. Obviously, I’m feeling a bit nervous for our chickens right now. Having the Vege Garden enclosed is a boost in security to that side of the Orchard Pen, but we must chicken-wire the whole fenceline soon.