It is a lovely rainy Sunday afternoon here, which makes it easier to have some Sabbath rest on the couch. The Husband is massaging my legs, which are sore from working on the Garage Project, and our snuggle cat, Simba, has joined the snuggle pile. The Little Fulla is playing on the floor with a mechanic workshop he’s built out of blocks, complete with an endless, crazy storyline. He has become quite the storyteller. I try not to do project work on Sundays in a bid to be intentional about building margin into my busy life. This morning I enjoyed gazing at the sunrise.

The Garage Project is taking up a lot of my time right now, but there have been plenty of other things going on too. Here are some bits and pieces from the last couple of weeks.

The Husband cut his finger on his pocket knife during lockdown, causing us an unexpected family trip to A&E and a long sit in the car for The Little Fulla and I, although at least picking up chicken food took up a chunk of that. The injured finger required four stitches and a couple of follow-up visits. We’re grateful that he didn’t cut a nerve. Of course, I was three-quarters-of-the-way through cleaning the chicken coop and hadn’t yet had lunch when The Husband came out and announced that I might need to take him to A&E, so I quickly grabbed some food and had to finish the coop when I got home.

Another bad event happened too. While I was doing a life group video meeting and The Husband was supposed to be watching The Little Fulla, The Little Fulla sat on one of the friendly little chickens and it died. This was announced to me during my meeting, so I had to carry on and try to put it to the back of my mind until afterwards. Of course, it was my favourite one of the little chickens, and one of only two male chickens on the homestead that was guaranteed top quality – without the red feather gene – one of only two sons of Tiggywinkle and the deceased Mr Anderson; a pairing that could never be repeated.

The Little Fulla knew he had done something terrible. There were a lot of sorry’s, a lot of tears on my part, important chats to be had, consequences and boundaries dished out and a lot of sad and angry feelings to deal with. I was so sad, both for the poor chicken having to die like that and for my loss of it. Sometimes life just isn’t fair. I had to surrender my feelings and words to God because I was SO angry and didn’t want to say or do anything I’d regret. Later on I was able to tell The Little Fulla that I forgave him and my anger subsided.

We are left with three black youngsters, which all appear to be boys, and the two blue ones, which currently look like girls. All but the one remaining Tiggywinkle boy are offspring of Duchess, who is most likely a red-feather-gene-carrier.

The two young roosters, Winston Cheepers and James Claw, have no sign of red feathers. It’s possible that their dad, Chippee Hackee, didn’t get mixed up in the red feather situation but I do not know for sure. Only time and experimentation will tell. James Claw has been seen strutting around with Paris and Frodo, head hen and deputy head hen, in tow. Winston Cheepers is not quite sure what to think of this. He’s still biding his time, holding his cards close to his chest.

Meanwhile, we are finally back in egg production. It’s like the chickens knew we were out of level 4 lockdown. They are organised, I tell you. Frodo has gone back to laying after being broody and one of her daughters, the blue Jenny Cheeply, has started laying. Woohoo! After doing much weeding work in the garden, the chickens are currently back in the pen since they’d started making a mess by kicking my mulch out of the garden. I don’t have a means to confine them in the Front Plot area yet, but at least they’ve eaten and scratched up some of the weeds and crop remnants in there.

In the garden, the mass of lettuces is coming along nicely and the carrots, radishes and beetroot are chugging along. The peppers that weren’t badly affected by the psyllids are still doing well in the mild weather. We have cabbages, kale, beets and self-sown beet/beetroot hybrids to munch through. These hybrids have beautiful deep burgundy-coloured stems and leaves that are a bit smaller and more prolific than the red-stemmed beets and the plants are narrower, taking up less space. I’m rather inclined to like them. The Little Fulla helped me to do some clean up of old crops and pull the structures out of the Veggie Garden. The brassicas are ready to be planted, I just need to do a little more weeding. 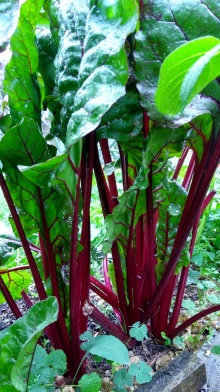 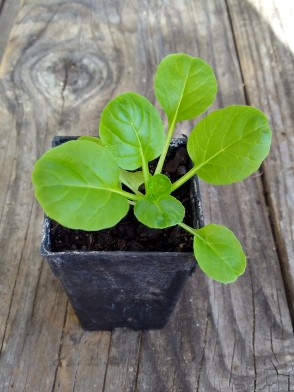 Tatsoi is such as cute wee vegetable.

The kale and other brassicas are waiting to be planted into the big wide world.

The feijoa tree has produced better this year, despite the drought. A lot of the fruit was too small to be of much use to start with, but then they got bigger. I’m surmising that the better production was due to getting some rain last month and being mulched with the flax plants that we dug up from out the front last year. That was a purposeful move on my part. It also helped prevent the chickens from digging around the feijoa roots. The Husband made a batch of feijoa chutney and I am going to freeze a bunch of feijoa flesh. 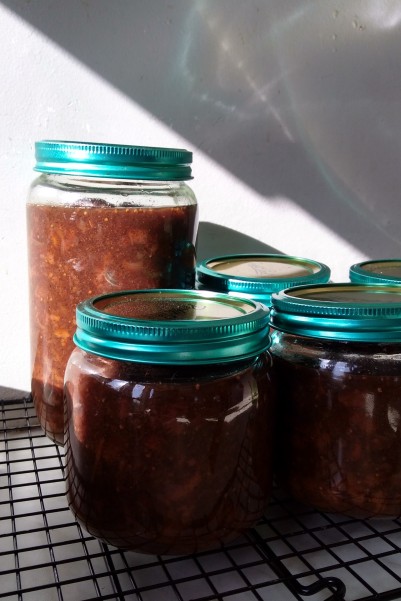 Feijoa chutney, made by The Husband while I was doing outdoor projects.

The white sasanqua camellia is flowering and attracting native birds like tui and silvereyes.

On foggy mornings many spiderwebs can be found strewed across plants. 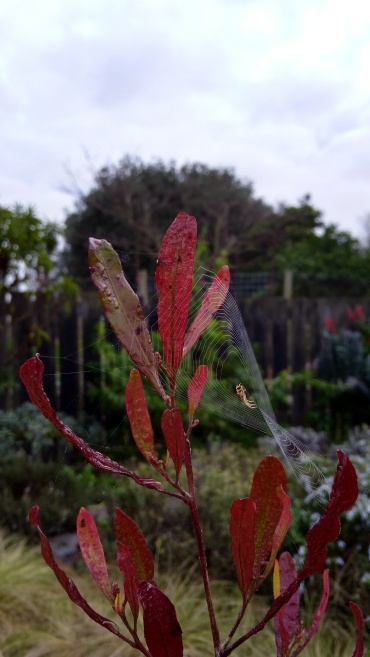 I enjoyed photographing this spider on the akeake (Dodonaea viscosa ‘Purpurea’) tree, which is adding a punch of purple-red to the garden now.

The fire ban has been lifted in our area, so on Friday we had Fire Friday. We got out a big wok that had been lost in the depths of the garage and caught my eye as a future firepit. The Husband rigged up a stand for it and made some genius marshmallow forks. Then we ate dinner in front of the fire, toasted marshmallows and watched the moon and early stars appearing in the night sky. Although many things about the future are uncertain, life is what we make of it.

We have a firepit! Janky it may be, but it works just fine for now.

There’s something magical about a fire at night time. With fairy lights. And giant pumpkins.

The Husband’s genius marshmallow toasting sticks. And I was just going to grab a branch to poke mine on…