The Front Plot is now a legit growing space. Last season we dug up a rectangle out of most of the front lawn, leveled the ground somewhat, put a very small amount of compost on and grew pumpkins, squashes and corn in there. Now it was time to get more serious about growing more food crops. No more giant pumpkins. For now. Proper rows needed to be made for optimum growing and maintenance. I am all for digging up the front yard.

I needed to get this done as quickly as possible so the leftover Autumn plants could get into the ground before it got too cold. And so began a concentrated effort.

First, we had to weed the Front Plot. Most of it wasn’t too bad – the parts that had been covered by sprawling pumpkin and squash plants and had grass clippings and wood shavings chucked on during the growing season. That ground had also been covered with black plastic while the plants were young and slowly pulled back as they covered more ground.

But the part where the corn grew (and the corner where the smaller Jack Be Little pumpkins grew) was bad. It sat bare while the little corn seedlings grew or corn seeds germinated and it never got mulched. The horrible, thick grass weeds took full advantage of this. It took a while to fork up that part and oust the weeds. While The Little Fulla helped me, with varying levels of helpfulness, he repeated to the weeds, “Get you gone, you little old man!” It took me a while to realise where he got that from. The Tale of Timmy Tiptoes again. Now I think I know why he was calling The Husband “Silly old man” a while ago. It was rather funny but, respectfully, it was not allowed to continue.

As we worked we watched the kereru (New Zealand pigeons) again, swooshing into the walnut tree and the other trees around us. We’ve been seeing at least one of them almost every day we work outside. One day we saw three! Lockdown was good for the native birds.

After the weeds were cleared things got decidedly more exciting. I formed the ground into four rows with little paths between them for access. The paths are important for being able to access the crops without standing on the garden beds. As with my raised beds, these in-ground beds are intended to never be stood upon, for that has a ruinous affect on the soil and the soil organisms. Having paths was especially important because I had decided to grow some tomatoes out there come spring and they need a lot of maintenance.

Conveniently, I discovered a local bark business that sells compost, mulch and other media, which is largely organic. I had no idea it was right there. We didn’t have enough of our own compost for the Front Plot. And so it was that we found ourselves with one cubic metre of compost delivered to our front yard. Before the truck delivered it I pruned some branches off the walnut tree that were hanging a bit low, then some young branches that were growing into the centre of the tree. The Little Fulla hauled off the branches and stacked them into a ‘house’, which he crawled into with a small stash of walnuts. I could hear him cracking away in there. That kept him occupied for a while. By this time I think he was half-convinced that he was a squirrel.

Then, something surprising happened. That afternoon, having finished work a little earlier, The Husband came out and helped us to get the compost spread onto the beds. With the three of us working away at it together, we got it done much faster than I would have been able to. It was such a good feeling and I’m so grateful that we could do it together. That evening I looked out upon our newly formed rows with their compost and their potential and thought, “Boom! We got more food security.” It was a beautiful sight.

The Little Fulla helped me plant out all the remaining brassicas we had: kale, broccoli, green cabbages, red cabbages and tatsoi. Plus a few lettuces. I had been working away at my Veggie Plan spreadsheet for the spring season to figure out how many tomatoes we would grow in the Front Plot and where they would go, to try and avoid planting the brassicas there, since the brassicas might not be ready to harvest by the time the tomatoes need to go in in spring. It was tricky but fun figuring out how many tomatoes I wanted to put out there considering how much corn and how many pumpkins and squashes I wanted to grow out there. And then potatoes came into the plan and it got more tricky! For now, I have settled on one row of tomatoes in the Front Plot.

After planting out the brassica seedlings I thought, why didn’t I grow more? And so, I continued to push the boundaries of what my garden can produce and sowed some more seeds. I sowed more broccoli and some spinach and onions, because the onion seeds only have good germination for about one season anyway so I might as well use them while I can. The broccoli won’t be mature until well into spring but I figured I could put it where the later things will be, like corn. You don’t know unless you try and I might as well be growing more in those lovely new beds. The new broccoli seedlings are ready to prick out and pot up already.

The next thing we did was put cardboard down along the rows to suppress weeds. It doesn’t look pretty right now, but I’m intending to cover the rows and the paths, if possible, with mulch. The weeds must be suppressed. I also trimmed the hedge, which provided a little raw mulch. We had three days of mild frosts but we’ve also had a bunch of rain and the plants are loving it. I haven’t lost any. 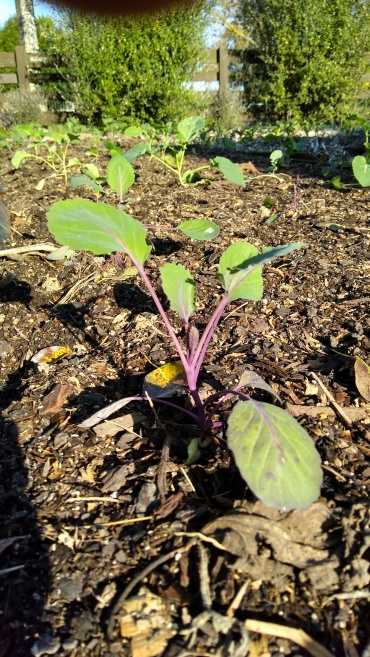 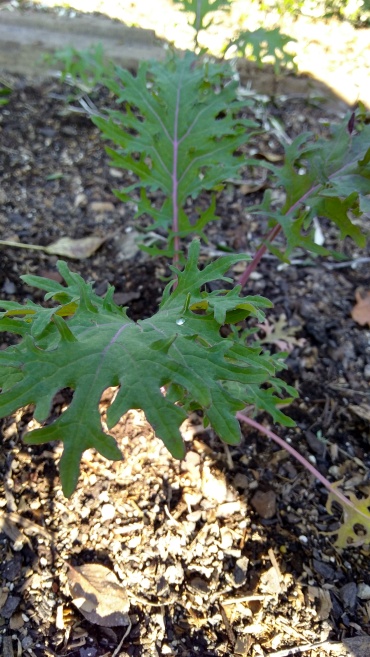 The ornamental strip of garden opposite the Front Plot is looking good as the native plants get bigger. It’s nice to have something looking good out the front, for the rest of the front garden is still lacking in attention. The burgundy Cordyline ‘Red Fountain’ is a favourite of mine and I’m delighted that all these divisions I took off my original plant have grown so well. The shrubs in-between are Coprosma propinqua and the ground covers are Lobelia angulata (syn. Pratia angulata) and Acaena caesiiglauca.

I will leave you with some photos of frost and fog, although it’s pouring with rain right now. This rain will really help the soil. And the vegetable seedlings.

6 thoughts on “Boom! We Got More Food Security”