The chickens have called for an election, but I think it was my doing. I ousted Paris, top hen. She didn’t go back to laying after moulting, which was very unlike good-laying Paris. The reason I kept her around, as the last crossbred, was because she was good at laying. There were a few days in which I saw her in a nestbox but no egg eventuated, then I found a disturbing broken, thin-shelled egg on the coop floor, with a lot of clotted blood instead of a yolk. I surmised it was probably from Paris as none of the others had been in the nestboxes with nothing to show. Poor Paris was on the chopping block. But I don’t often butcher just one chicken at once, so I also put Link on the chopping block. She has never been a good layer and I was just keeping her around in case. But with egg hatching underway it was time to make space.

I felt a little bit bad butchering Paris, because she had been around for so long, over 2 1/2 years, but those feelings soon gave way to relief that I had made a good choice. She has had less attention and checking than the purebreds recently but then she’d always been hardy, bossy and fine. But Paris suffered from something that top hens can be prone to – greediness. I should have kept a better eye on her weight, as she was quite bossy by nature and didn’t like to share food. I could tell when I picked her up that she was fat and heavy around her bottom. Upon processing, I was somewhat ashamed to find that Paris was very, very fat. No wonder she had problems. Thus ends the sometimes tyrannical reign of Paris, who not even some of the roosters could control. My flock is now all purebred Australorps, so that is good.

Thus, the top hen spot is now up for grabs. The chicken politics are all-over-the-place. Winston Cheepers, of course, thinks he deserves the overall top spot. A couple of the hens are still not in total agreement about this. Winston Cheepers doesn’t seem to have an obvious choice for his deputy. Perhaps he doesn’t mind who it is as long as she let’s him do his thing.

I cannot say who is going to be top hen. Frodo is always up there near the top because the others tend to respect her seniority, but she’s off being broody half the time and is of a pretty calm nature, so I don’t think she’s going to campaign for it. Tiggywinkle is a highly likely contender, and perhaps Jemima, although Jemima isn’t as confident. Morpheus and Trinity seem to be floating around somewhere in the middle. Jenny Cheeply is waltzing around everywhere proclaiming seniority, so she’s a strong contender too. Helen Cluck has gone a little quiet so I don’t know what her game is.

The young cockerel, Todd, is now trying to throw his hat in the ring. Winston Cheepers and the hens aren’t having a bar of it. And then there are the two youngest candidates, the blue pullets, Jacinda and Judith. They don’t have enough experience to get anywhere in this election, but Todd is trying to draw them into his party nonetheless. 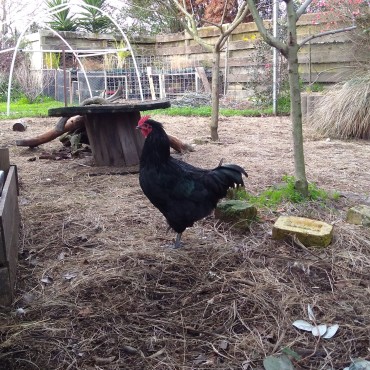 Todd is doing his best to promote himself.

Judith and Jacinda don’t know what all the fuss is about.

I threw another curveball into the chicken politics too. Ribby, who had been sold to friends of ours along with two of our other girls, had turned into a serial broody with a schedule. This was not helpful to her owners, so she was enrolled in an exchange programme with Duchess and the transfer was made. Duchess was a great hen but her uncertain parentage made me unwilling to use her for further breeding at this stage. Ribby is in the same boat. They should have been fathered by Darrington but young Thomas was actually active at that point, and he could have passed on undesirable red feather genetics, which come from Frodo. He had no red feathers himself, but one of Duchess’ sons had red feathers come through. I have not hatched any chicks from Ribby, so I can’t comment on suspicions about her fatherhood.

After a week of quarantine, Ribby entered the pen with the others. We had just spread hay on the ground, which was a good distraction from another candidate entering the ring. Jenny Cheeply and Jemima seemed to be the most affronted by the entrance of Ribby. It seemed to be a blue hen thing. Winston Cheepers had to jump into action and break up the bickering, which he did very well. He went on to herd the ladies away from each other and place himself as a buffer between them. Ribby is not likely to jump to the top spot, being late to the game. But it’s anyone’s guess right now.

There are eggs from Jenny Cheeply and Frodo in the incubator, at Day 5. The others have been uncooperative with laying. But can you blame them? It’s winter and they have also had a lot of changes of late, with some big comings and goings. Maybe after the election things will settle down.