It is the middle of winter here. It’s been reasonably mild thus far, apart from one rather cold snap, and we are well past the shortest day, so that is something. I don’t mind winter as much as some people do. As long as The Little Fulla doesn’t bring home a cold… When it comes to vegetable gardening, winter does not have to be walking through the valley of the shadow of death. In most places there are still crops you can grow. It is just a matter of learning what and when.

I recently read a gardening email that had pictures of what you can grow in July. There was a selection of flowers and fruit and then the sad, sad appearance of just one member in the vegetable department – silverbeet. “Aha!” I said. This is why so many people think that all you can grow in winter is silverbeet. I used to be one of them too. That’s what we get taught, apparently. I know there isn’t space to have pictures of everything you can grow on a small, snappy diagram, but the winter vegetable garden is so much more than silverbeet. No wonder people aren’t inspired to grow a second round in the vegetable garden. I’m not a huge fan of silverbeet, but I do grow the red-stemmed beets in my garden. They look nicer and they ought to have more antioxidants in them too. I leave them to self-sow now. They’re useful for things like quiches and for frying if I run out of kale, although I much prefer kale. At the very least, they’re always there to provide greens for the chickens.

What you can grow in winter will depend on your climate. It is useful to know what the plant hardiness zone of your area is. New Zealand is a bit tricky since it’s a small country but also has a lot of different terrain with mountains, plains, hills, coasts and the distinctly warm upper north. Here are links to two different maps for plant hardiness zones in New Zealand:

They both give different zones for a number of areas and some difference in the range of average coldest temperatures, so it is important to combine this information with some knowledge of your area’s climate and any microclimates that could be within your garden. When you know how cold it can get in your garden you can start planning what you can grow and when. As always, trying things, making notes and learning what works and what doesn’t is an ongoing process in one’s garden.

Our garden is in 9a or 9b. It is hard to find accurate weather records for our area since it isn’t a main centre. But I know we get colder minimums than our nearest city, Hamilton. The weather station at Hamilton Airport has an average minimum temperature of -3degC in July, which, of course, is the line where zone 9a meets zone 9b. Maybe one day we’ll get a weather station at our place.

For now, I’m just going to write about and show you what we’re growing here at the moment, quickly now before winter ends. I’m not going to pretend I didn’t start writing this a few weeks ago… Here are some main things to note about growing vegetables in winter, where I’m talking about growing things outside, without the protection of a greenhouse, etc.:

There are two main categories of vegetables you can grow in winter:

Crops in the first category need to have some time to grow before 1) the ground gets too cold or 2) the temperatures get too cold or 3) the daylight hours get too reduced. There is some overlap, as some crops fit into both categories.

In our garden this year, the crops we have in the first category are:

In the second category, we have:

Brassicas can grow just fine in winter here, as long as their roots don’t get frozen when they are young. The main reason people get most of them in earlier before winter is because they take some months to mature and you don’t want them loitering around in the way of the spring garden plans. Broccoli generally matures faster than cauliflower and cabbage. Tatsoi and pak choy mature much faster. Onions grow pretty slowly to start off with but they can handle the cold just fine and can be kept out of the way of other things if they’re planted in a line or in-between other crops. 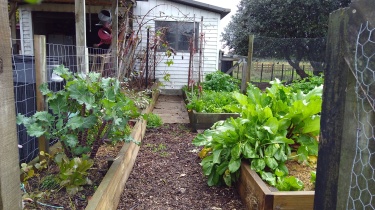 The Veggie Garden in July – the middle of winter. on the right we have the perennials, rhubarb and sorrel. On the left we have a kale that has been in there since last spring and really needs to come out. Don’t worry, there’s more. There are some lettuces too.

This is the main ‘sowing the seeds of victory’ bed that was sowed in autumn. It is full of lettuces and carrots and the spring parsley is still going.

The brassicas in the Veggie Garden aren’t growing as fast as the ones in the Front Plot. Here is broccoli, cauliflower and tatsoi, planted in late autumn. There are also some radishes and a volunteer dill, plus kale and lettuces at the back.

The green and red cabbages. The spring onions on the right are still rocking around from spring.

Winter growing at its best: carrots, beetroot, a few parsnips, leeks and red-stemmed beets. New onions and leeks are being planted in the part near the red-stemmed beets. The big leeks are leftover from spring/summer and need to be used soon. The variety Musselburgh holds really well in our garden without going tough. 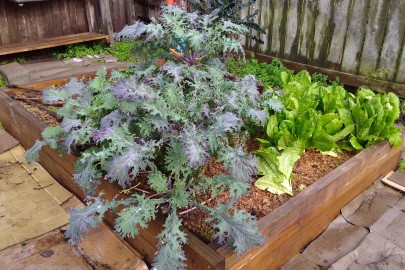 More kale left from last spring. It not only gets prettier colours in winter but tastes nice in winter too. And more lettuces. These are ‘Vivian’ cos lettuces. 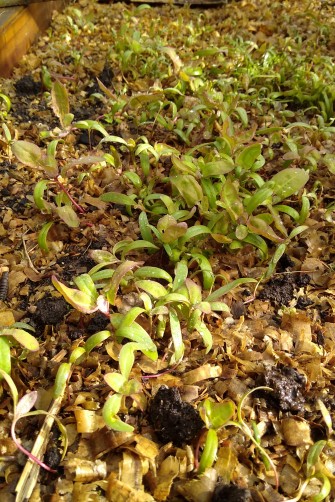 And then there’s the orach seedling forest. I let the summer plant set millions of seeds and yes, I did sow the seeds of victory in this bed. I didn’t know if they would germinate in winter but they did.

We ate the first tatsoi about two weeks ago. The kale is being harvested too. The broccoli and cabbages are growing well, aside from having a few holes eaten in the older leaves by slugs and snails. I also have tatsoi, broccoli, cabbages and kale, plus a few cauliflowers in the main Veggie Garden and it is quite obvious that the ones in the Front Plot, although planted a little later are doing noticeably better than those in the raised beds. Since it is winter, so dryness is not an issue, I attribute this to the addition of a layer of good compost, including lime, before planting. The raised beds that have the brassicas growing in them didn’t get topped up with compost before planting. I am really glad I got the Front Plot going. Now, if only I’d done it sooner! 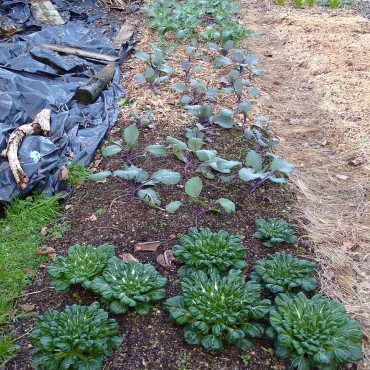 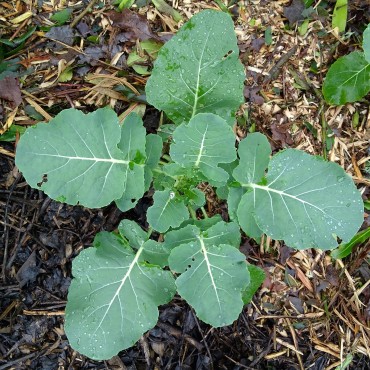 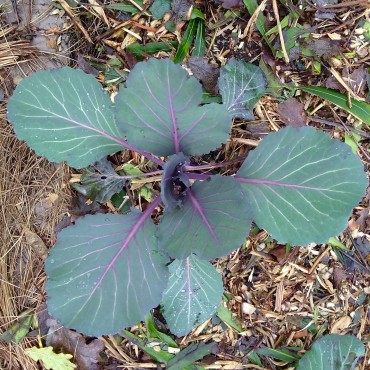 Speaking of dryness, we’re at the rainy, soggy point of year in which one could almost think that the drought of summer was an imaginary thing. Drought? What drought? There is plenty of moisture in the soil now and the plants are loving it. But I do remember the drought conditions of the last two summers. While it seems inconceivable in the middle of a wet winter, it could happen again, and should be planned for. Winter is a good time to think about how we can harvest the plentiful rainwater. Do you need to buy or build something for that purpose? If you need a rain tank, get one before everyone else is scrambling for one and prices go up.

Back to the plants. Last weekend I planted the second batch of broccoli seedlings – 30 to be precise – and some ‘Great Lakes’ iceberg lettuces. In hindsight I didn’t really need to sow those lettuces. The mass of ‘Vivian’ cos lettuces that self-sowed or grew from the seeds of victory that I sowed liberally in the Veggie Garden during autumn are doing very well now. I also planted out the 6-pack of spinach seedlings I grew. We will not be short of salad greens any time soon. Or kale. I am continuing to transplant onions into the Veggie Garden as they get big enough.

And then there’s the third swathe of broccoli seedlings – 18 – from the seeds that I sowed on 20th May, because I decided I needed more. They are hardening off on the outdoor table and will be ready to plant soon. I’m not planning to grow broccoli in the spring garden since there’s too much of an onslaught from the white cabbage moths, hence the mass of broccoli now. I’m trying out how things work with various autumn/ winter timings. Broccoli and cauliflower are great crops to grow through winter in our area because you can easily chop and freeze the heads for later use. Now that I have the space, I am hoping to fill the freezer with chopped broccoli. The Husband finds it amusing that I never even used to eat broccoli.

Since the tatsoi has grown so well and so fast in winter I sowed some more in trays. I also sowed some red pak choy. I gave up growing pak choy in the spring garden as it just kept bolting in the bipolar spring conditions or the heat of summer, so I am trying it once again in a different season. The tatsoi does well year-round here. I am enjoying the experimentation with the autumn/ winter garden. Getting better at growing things through the lesser season will take some load off the busyness of growing in the main season. I hope.

In just a matter of weeks it will be time to start sowing crops indoors for the spring garden. Eek! The peppers and tomatoes will be first. That’s the other thing that winter is good for – planning the spring garden and buying the necessary seeds. I can’t say I’ve properly finishing planning what to grow where, but I have got all the seeds. ALL the seeds. The Front Plot is going to face an onslaught of tomatoes, corn, pumpkins and potatoes. I’ve bought my Agria seed potatoes too. The main Veggie Garden will host all the usual things, minus broccoli and cauliflower, with a few new varieties and a few crops that are new to me: swedes, kohlrabi, okra and ground cherries, which are a compact version of cape gooseberries, which I have never tried either. The swedes are actually for next year’s cold season, but I am thinking about trying to grow some now. I am going to sow some kohlrabi soon, so I might as well try a few swedes while I’m at it, right?

4 thoughts on “You Can Grow Food in Winter”